I just returned to San Francisco after having a blast at my second SXSW. Last time I attended, two years ago, I spent most of my time attending sessions and networking. This year I was mostly on the other side: preparing talks, staffing booths and organizing events. This year's highlight was definitely the LEGO MINDSTORMS hackathon, held as part of The League of Extraordinary Hackers event put on by Google and others, that I helped Chris Messina organize. We modeled the event after Breadpig's Hack Club, but scaled it up. The event was so awesome that here I am blogging about it! 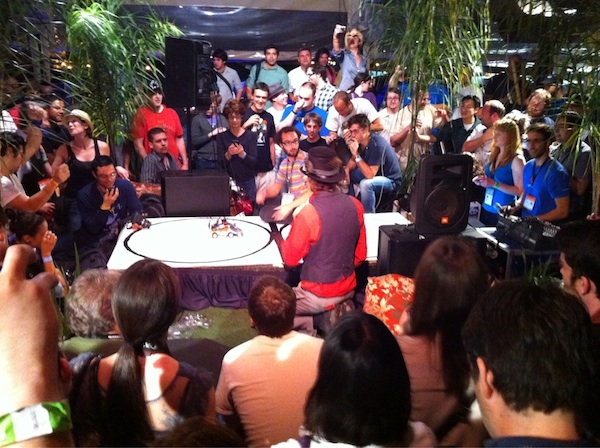 At 7pm, 12 teams of 3-6 people began building MINDSTORMS sumo robots which would then compete in a double elimination tournament. We had mixed skill levels, from complete novices to people working at National Instruments, the company that builds the LEGO MINDSTORMS software. Teams were given 4 hours to build their robots out of two complete NXT sets and additional LEGO parts. During battle, their autonomous robots were placed back to back, starting with a 180 degree turn before trying to push each other out of the ring. The battles started at 11:30pm, and went on for about an hour.

We had a great turnout of spectators and builders on the third floor of the Speakeasy. The crowd was engaged the whole time, thanks to the lively narration of MC @tielure, which is quite surprising, given the amount of party hopping that usually ensues during SXSW. Here's the final round (Tiger Blood vs. Beam Me Up):

At the end of the day, we made hundreds of geeks happy, and donated something on the order of $15,000 of LEGOs to charity. I got to work with tons of awesome people, including @chrismessina, @kcpike, @StevenCanvin, @Chrysaora and many others. The event even got some good press on mashable.

My only regret is not having my real camera with me, so if you have high quality footage of the event that I haven't included in this post, please let me know. Looking forward to next time!