And that's the way you do it.

Your smartphone is now in a box, so how do you do input? Now that we have a paper accepted to ISWC 2015, I can tell you!

It's not easy being in a box

Let me remind you: your smartphone is still in a box. This means that your fingers can't reach the touch screen or the volume buttons. Let's consider a couple of input alternatives:

Ok, let's nix those. How about permanent magnets? They are inexpensive, robust, require no power to operate, and do not degrade over time. The vast majority of smartphones have a magnetometer, which is used for the compass. Intriguing...

In 2010, Hamed Ketabdar and others published Magitact, instead using a magnetic rod for more varied interactions near smartphones:

In 2011, Daniel Ashbrook and others published Nenya, which is similar to Abracadabra, but focused more on the eyes-free input aspects:

In 2013, Sungjae Hwang and others published Maggetz, which used passive magnets to build all sorts of widgets around the device: 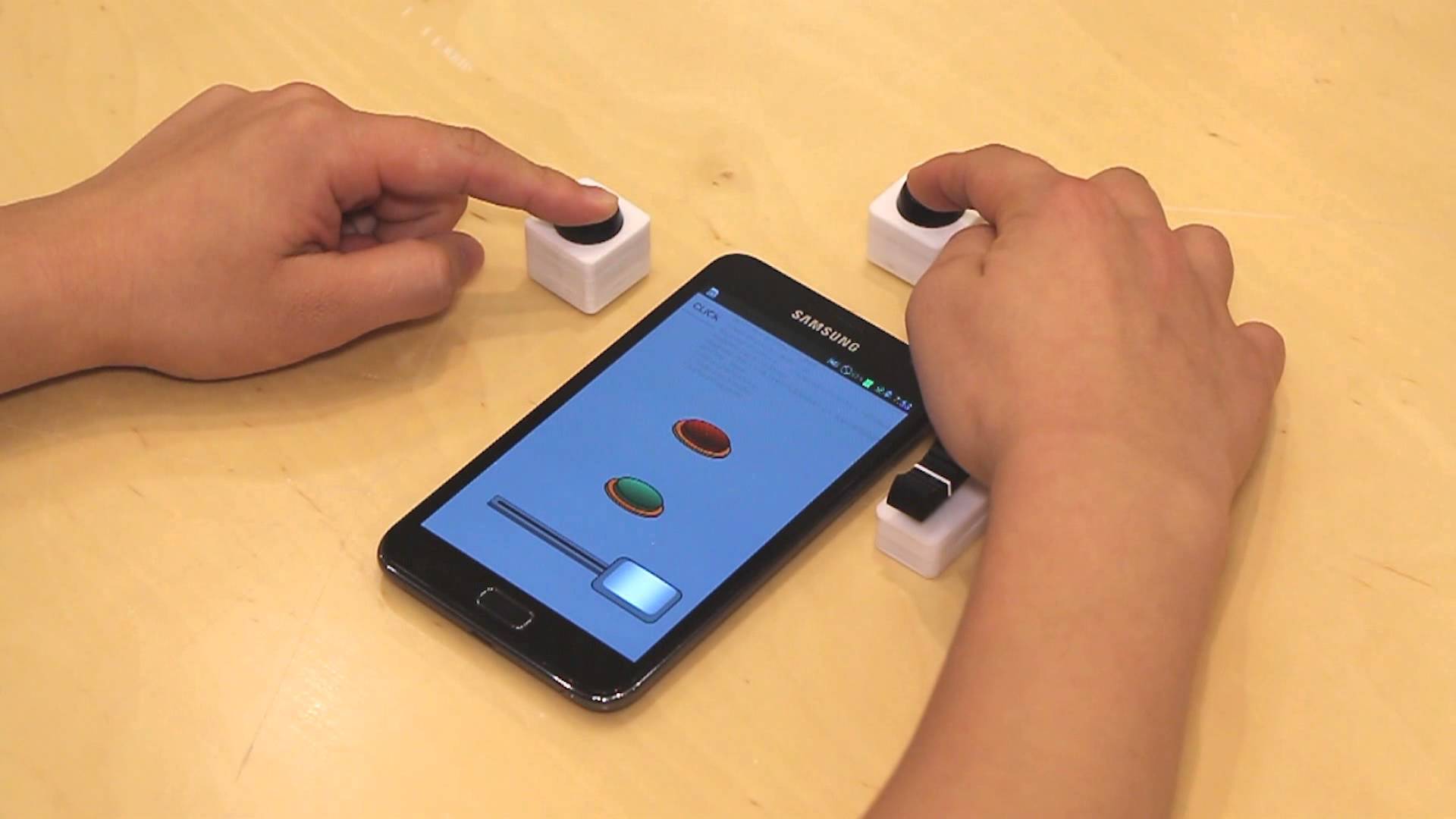 Fucking magnets: how do they work?

Magnets affect the magnetometer in an inverse-cubic relationship, so distance between magnet and magnetometer really makes a dramatic difference in signal strength. We empirically determined that in most phones, the sensor is placed at the top of the device, near the earpiece:

Some magnetometers are really screwy, like the one found in the first revision of the HTC M7, or broken, like in some models of the Galaxy Nexus we tested with. There's little that we can do in these cases, but luckily they are quite rare. 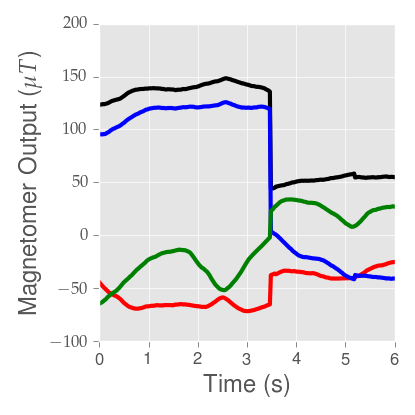 The way you access the magnetometer on Android is via the sensor stack, requesting the TYPE_MAGNETIC_FIELD sensor. This is a calibrated sensor, since it's primarily used to determine the direction of magnetic north for the compass. Calibration means that somewhere deep inside Android, software and hardware periodically calibrates the output of the sensor. When calibration occurs, magnetometer readings effectively reset to some new coordinate system.

Calibration can happen at any point, and the calibration pattern can look quite different depending on the device. In some cases, it's a gradual calibration, not a sudden spike as above. This limitation restricts what we can reliably detect, which is why we chose a pull-and-release interaction. Android already has provisions for an uncalibrated magnetometer via TYPE_MAGNETIC_FIELD_UNCALIBRATED, but this sensor is not nearly as ubiquitous as its calibrated cousin. Even so, we should be robust to phone insertions and removals from Cardboard, which can also look like calibration events. 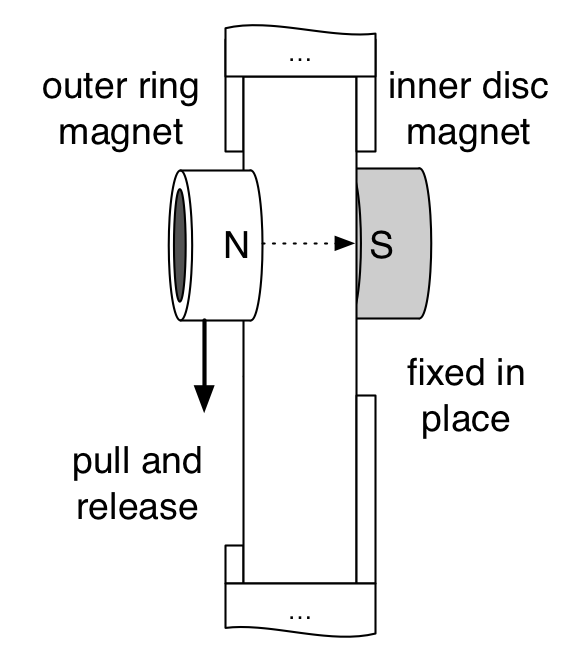 As you can see, the interaction involves pulling the magnet downward, and releasing it. The magnetic ring automatically returns to its rest position because of the force exerted on it by an internal magnet. The external magnet is also held in-place by the same force, and while it's possible to pull the magnet off the cardboard side, it takes concerted effort to do so. The motion of the magnet is constrained by a cardboard indentation, so it can only move downward. The thing I find most elegant about this design is that both the digital signal to the smartphone and the physical mechanism itself relies on the same principle: magnetism.

We collected a bunch of data for this pull-and-release interaction from many devices. We found that most devices behave predictably well. Here's a combined plot of normalized, superimposed positives and negatives from all phones which we collected data from, with each dimension of the magnetometer vector plotted separately. 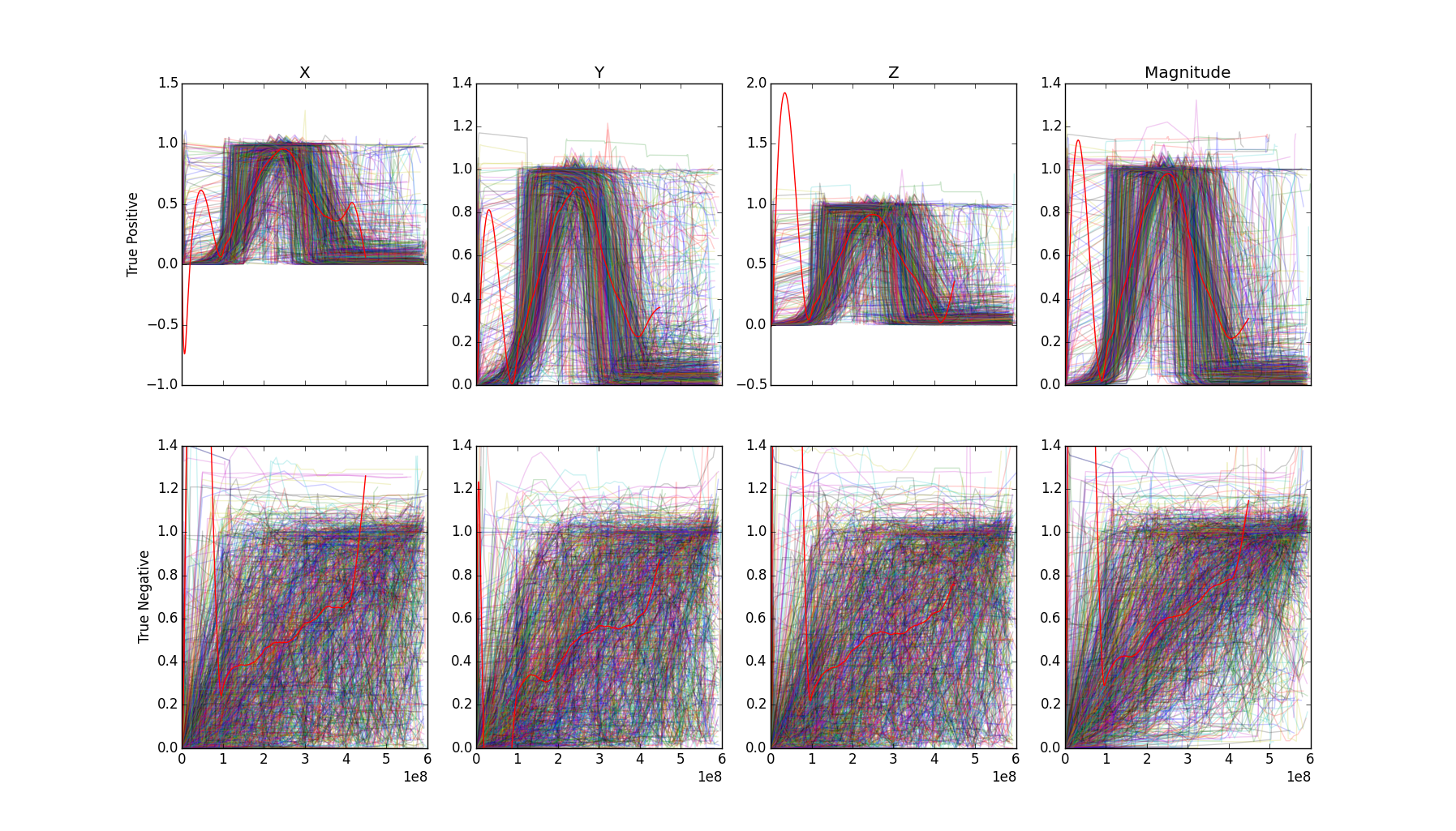 The detector we built was not based on a template learned from all of the data above, but a simpler state machine based on thresholding. The thresholds themselves were learned empirically. Here's the simple state machine: 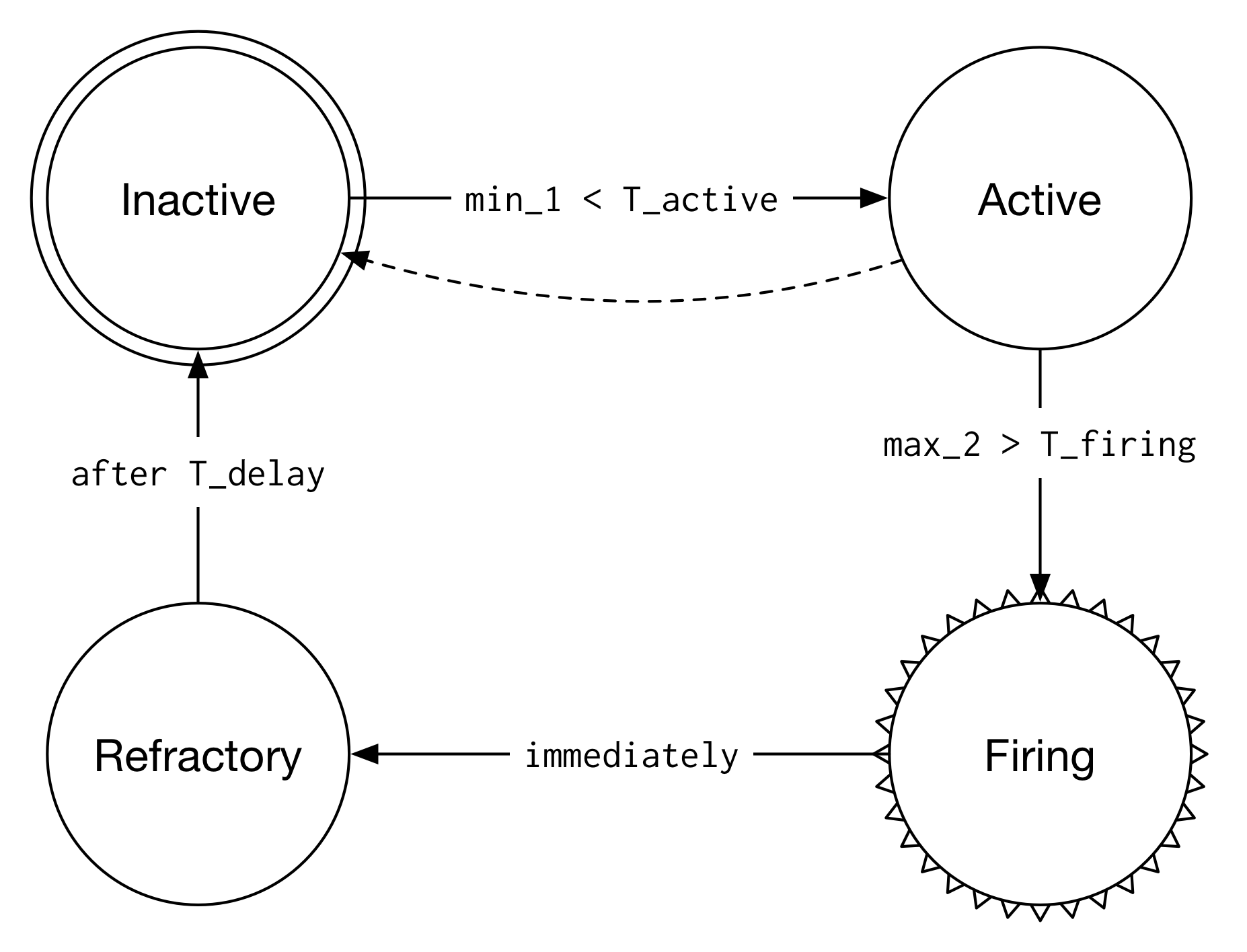 The basic idea is that we take a sliding window approach, normalizing all of the data relative to the last value in the window. For each window, we calculate min_1, which is the smallest value of the first half of the window, and max_2, the largest value in the second half. Next, we compare to empirically determined thresholds perform the appropriate transition in the state machine. I won't bore you with details of normalizing the data, etc but you can find all of the details in the paper. Oh, and all of the code is also available on github. 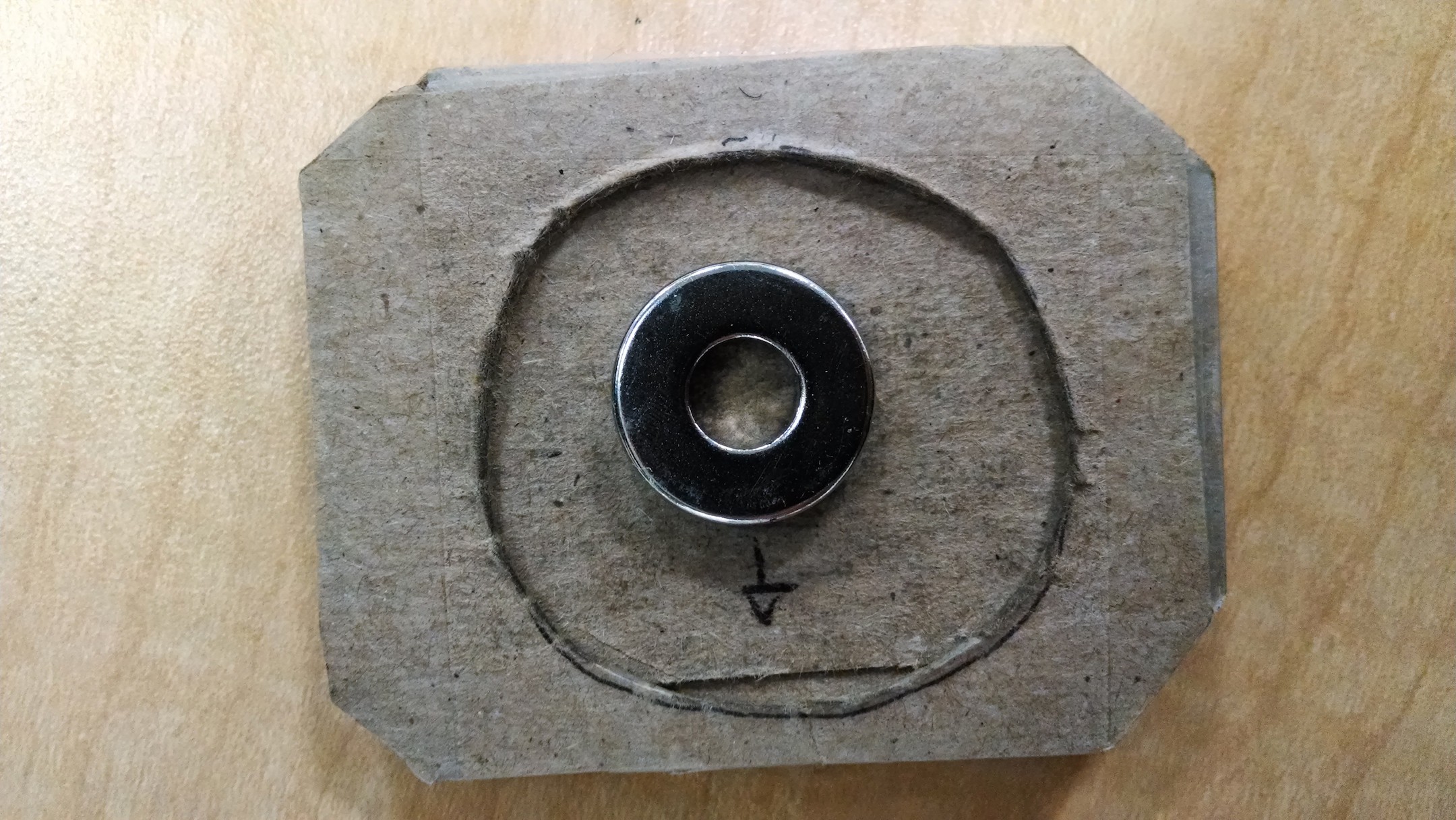 A lot more can be done using passive magnetic input. With uncalibrated magnetometers, there is no fear of calibration events, so we could implement a faster detector based on just the down motion of the magnet. We could reliably detect long presses and double clicks. Alternatively, extensions to the existing input can be implemented by simply changing the geometry of the physical constraints, such as a joystick form factor.

I'm incredibly happy that Cardboard has been doing so well. Thanks to the great team working so hard on it, there are now over 1 million units shipped. The press has been happy with it too, with kind reviews from many tech publications.

This funny little cardboard faux-Rift has something even the original Rift itself does not: a built-in button. Your phone is able to sense the magnet’s movement, allowing it to act as a ridiculously clever little button. Yeesh.

One of the things I liked most was a switch located on the left temple, which consists of just a couple of magnets and a metal ring.

Future versions of Cardboard are switching to a different input method using a conductive button which brings your body's capacitance to the screen, similar to how a touch stylus works. It's cheaper without them, and the new input works well, but I'll definitely miss the magnets!