According to the American Press Institute,

News is that part of communication that keeps us informed of the changing events, issues, and characters in the world outside.

There are many ways for news to be uninformative or even outright misleading. Two trends in particular have received a lot of attention recently. The first is social recommendation systems and selective unfollowing, which creates a reality-distorting echo chamber. The second is fake news, which sure is in vogue these days, and is obviously a problem that we should tackle.

This post is about a different trend: real news presented with misleading frequency. The issue at stake is the media's ability to inform its readers and serve the public interest.

If you are a New York Times reader, you may have noticed a certain individual prominently mentioned in the newspaper over the last several months. I wanted to know just how much, and started daily screenshots on August 3rd, 2016. To my great surprise, this was exactly one hundred days before the announcement of the 45th president-elect. My analysis was very simple.

I should note some limitations of this approach. This process itself was more manual than I would have liked. My script took screenshots only, so I did not have access to the markup of the page. I tried auto-reconstructing the images using tesseract, but the results were not perfect, pdfgrep had only limited use, and I had to visually inspect the page to get my data analyzed. The data are in this spreadsheet, and I've made the raw screenshots available too. There are non-technical problems too. The web version of the New York Times is updated on a more frequent than daily basis, so my screenshots missed some versions. Also, notions of "lead story" and "above the fold" don't really make sense online. I arbitrarily defined "the fold" to be 1280 px, as in this example: 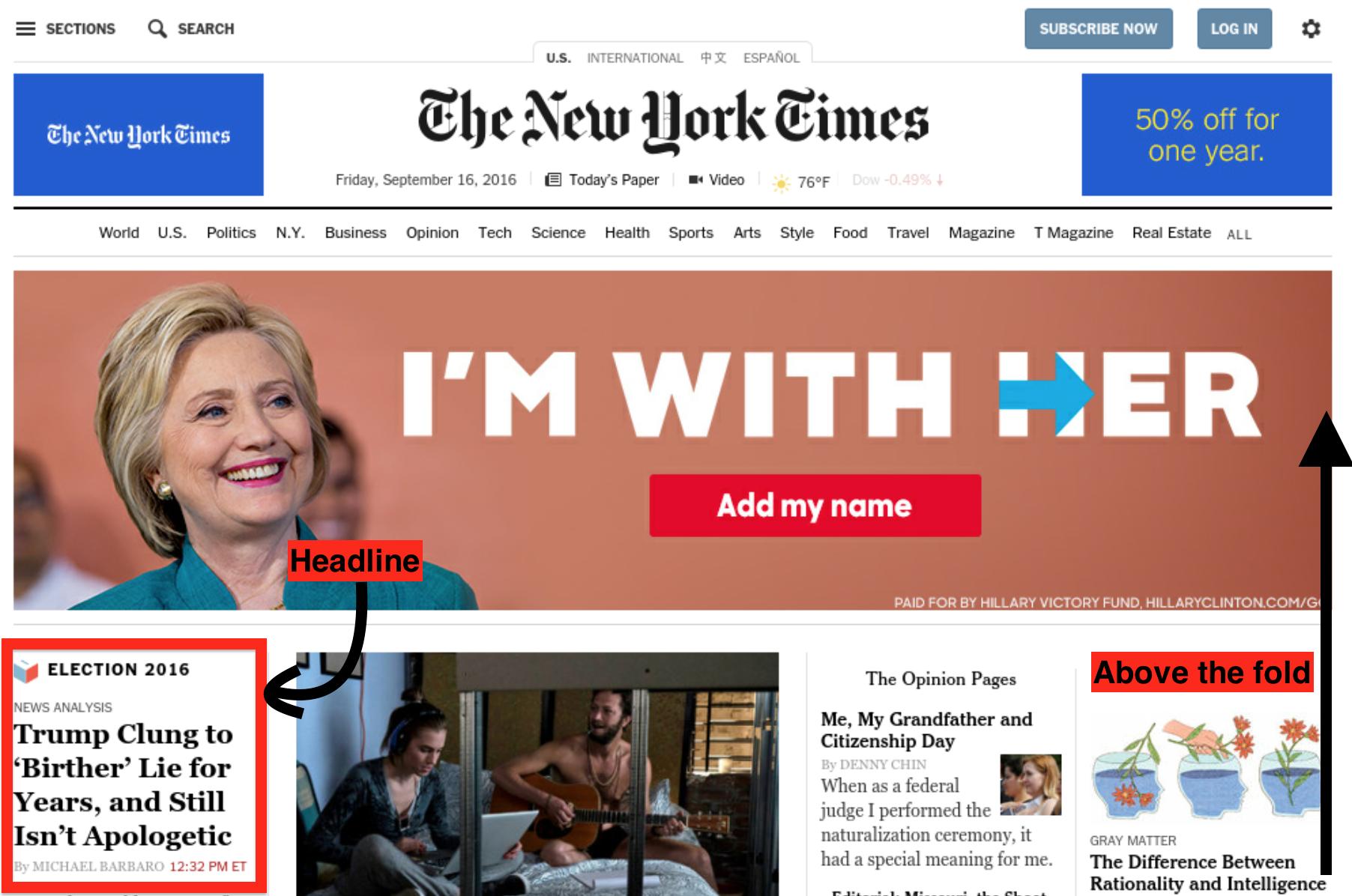 As for the results? Half of the NYT's headlines had "Trump" in the name, and the frequency matched my intuition. It sure did feel like this dude was getting a whole lot of coverage. In fact, he got far more coverage than my method reveals, since many lead articles without explicit mention of his name in the title were still mostly about him.

I was amused to see long runs of adjacent days of headlines about the president-elect-to-be followed by many days of respite. For example, from August 9th to 17th, "Trump" was featured consecutively, only to be broken by the news of Zika having spread to Florida. The longest respite took place between September 19th and 27th, when the nation's focus switched to the Manhattan bomb scare. Things heated back up on October 8th, and stayed hot until the 18th, when his boasts about groping women were released to the public.

Just for fun, I looked through some other news that lost the contest for most important story of the day. Here are three randomly chosen examples:

I claim that the distribution of coverage in the days running up to the election did a bad job of keeping us informed of significant events, and went against the public interest.

On not being well informed

Only 15 reporters were present when Harry Truman announced the use of nuclear weapons against Japan. By 1990, nearly 2000 reporters held passes to the White House pressroom. The presidency has become an increasingly important focal point for the media. But as I write here in 2016, the coverage of a mere presidential candidate has come to eclipse absolutely everything else. Reasons why this is bad:

On not serving the public interest

In one interpretation, "public interest" taken literally means providing the public with what they are interested in. And if the object of interest is a particular individual, so be it! That's how YouTube works: you watch a lot of cat videos, YouTube learns you are into cat videos and gives you more cat videos. This is problematic in and of itself. But capital-J journalism that the New York Times is associated with is held to a different standard.

The literal definition leaves a lot to be desired. My view of public interest is more paternalistic and centers on that which is beneficial for a well functioning democracy. In that view, here are a few reasons why focusing so heavily on Cheeto Jesus is counterproductive:

Events have a timeline, but if the object of obsession is an individual, it's the gift that keeps on giving.

Engagement, clicks, and the bottom line

Why did the New York Times cover that despicable man to the extent that they did? I venture a couple of guesses:

All things considered, I lean more towards the second possibility. While I can't rule out the first guess completely, it seems to be contradicted by the explicit confidence the NYT had in a Democratic win. Back in March, Vox asked the same question and answered it simply:

The media covers him a lot because his campaign is fascinating and people are interested in it.

Notably, at the time, 13 percent of Vox stories were about the short fingered vulgarian, but generated 26 percent of their readership. With statistics like that, guess what topic gets covered more? As for public interest, the author of the piece doubted that his attention-getting tactics would continue to work in the candidate's favor. Carte blanche justifying continued coverage? How convenient!

The internet has changed the media in a fundamental way. Even great publications like the New York Times haven't quite figured out how to balance their (understandable) corporate need for profit with their journalistic responsibility to the public's interests. Our culture of not paying for news content leads to media companies to seek other sources of income, mostly in the form of ads. But you get what you pay for! Rather than covering the world in a balanced way, the world is covered in a way that more people will want to read.

The result is a killer combination of consumer driven demand (oh my god, what is he going to say next?), and a desire for publications to maximize ad revenue. The term is "engagement", and Joe Edelman does a great job of explaining why this is a dangerous thing to maximize.

If newspapers did not need to maximize engagement to be profitable, there would be room to make decision that are aligned with actual public interest.

What makes a story newsworthy? Two ingredients at the very least,

The thing is, it takes time and effort to decide whether something is of sufficient interest to the public. So there is an inverse tradeoff between the ability to deliver both. The faster you deliver news, the more shortcuts must be taken to measure public interestingness.

The general trend in the media is one of spacetime compression. Before the telegraph, it would take months for transatlantic news to travel. The fastest way to get information across was a slow moving frigate. Before Gutenberg, it would take weeks more for the newly arrived information to spread. Over the last three centuries, the news cycle shrunk down to a daily basis. Today, since everyone has a mini-printing press in their pocket, the news period is arbitrarily small. According to Tristan Harris, the average person checks their phone 150 times a day.

With people checking the news every 10 minutes, there is a lot of pressure for journalists to produce more content, more often. And indeed, there's a lot of content online. But more does not mean better. Increasingly, news is re-aggregated and re-published. Commentary is cheap and can be attached to a brand or personality, which means more clicks. Investigative journalism takes time. Unfortunately, by the time your investigation is finished... oh look a squirrel!

It's tempting to blame the media for this, but the media is a reflection of our collective psyche magnified by modern technology. We need to value novelty less and learn how to delay gratification. Take a lesson from wine tasting and meditation. Accept that news happens and let it breathe undisturbed for a period of time. After all, hindsight is 20/20.

Any publicity is good publicity

In another, even more cynical and dangerous variant, the media-savvy operator mostly says and does outrageous things that may or not be true, purely for attention. Oh my god, he said he would date his daughter! Minor celebrities like M have perfected this technique, but the Orange One is a true master. Sometime in July, his wife gave a speech which was blatantly plagiarized. His response to the controversy?

“Good news is Melania’s speech got more publicity than any in the history of politics,” he said, “especially if you believe that all press is good press!”

Straight from the horse's mouth. On the internet, we have an expression: "don't feed the troll". I guess the New York Times didn't get the memo? Whatever the case may be, the news media just helped feed the United States of America to the biggest troll ever.

This is bad, what do we do?

Here are some possible things to try: