Why Greatness Cannot Be Planned 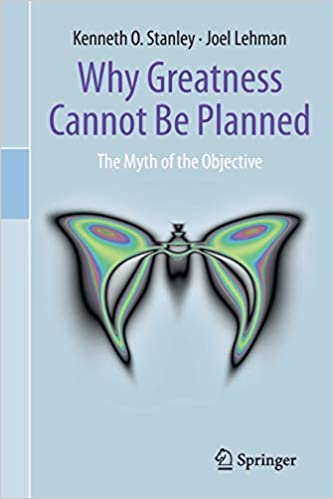 Another GB recommendation that I really enjoyed. It's hard to summarize this book succinctly since it is such a potpourri of different fields and ideas.

A different lens on Evolution

Evolution is the ultimate treasure hunter, searching for nothing and finding everything

Evolution works under a constraint: whatever it produces must survive to reproduce. "Survival of the fittest" is the most popular conception of this process but does not capture any nuance.

The problem with competition as a general explanation for creativity is that it usually drives towards everything converging to the best. Selection is not really a creative force: It focuses and optimizes, and ultimately restricts exploration

Forces at play in evolution:

As much as I disliked Finite and Infinite Games, this discussion of evolution reminds me of it a bit. The only goal of an infinite game is to keep playing.

In an interesting twist, even our human inventions can be considered an evolutionary process since they were created by us, the products of evolution.

The bottom line is that many of our greatest engineering aspirations—such as flight, solar power, artificial intelligence—were not the explicit objective of evolution, though it created all of them.

A key metaphor often used to explain non-objective search processes is that of crossing a lake using stepping stones in dense fog.

Because of the fog, you don’t know where either path leads. For all you know, one might lead you to a dead end while the other eventually might reach the other side of the lake.

Almost no prerequisite to any major invention was invented with that invention in mind.

Expected inventions (eg. flying machines) fall less neatly into this metaphor. They are like hills above the fog, but you can't quite figure out the path to get there. On the other hand, once you get close enough to that hill, something that was completely out of reach becomes attainable.

This idea of invention as a process of groping for the next stone in the dense fog makes it clear that learnings from the history of science are inherently limited. Again that McLuhan quote about walking backwards into the future comes to mind.

Contrary to popular belief, great inventors don’t peer into the distant future. A false visionary might try to look past the horizon, but a true innovator looks nearby for the next stepping stone. The successful inventor asks where we can get from here rather than how we can get there. It’s a subtle yet profound difference. Instead of wasting effort on far-off grandiose visions, they concentrate on the edge of what’s possible today.

This reminds me of my Asimov's Tech Tree project, and that I really should re-think it as follows. Consider an impactful modern invention and work backwards through all of the inventions its inventors were inspired by. Then repeat this process, creating a tree culminating in this invention. This view would serve to illustrate the many surprising new horizons that one invention enables. Examples include the way that looms and vacuum tubes lead to computers, and smartphones led to better batteries, and better batteries led to electric cars. Authors included a few other uncited example I found interesting:

In many cases, the inventor is driven by a search for the interesting and novel. Art often follows this pattern too, since it is more often done for its own sake. This is a very fluid process involving a lot of gut feeling, hunches and intuition. As many inventors do this, the process compounds.

The important point is that novelty (and interestingness) can compound over time by continually making new things possible.

Picbreeder and other open-ended search applications

The authors rely mostly on Picbreeder, but also on other projects from their research on open-endedness to make their point, which can be boiled down to this:

The more troubling lesson is that objective-driven search is sometimes embarrassingly incompetent.

They built a walking robot simulator and compared optimization to open-ended search. They found that the robot that tried to walk farther and farther actually ended up walking less far than one that simply tried to do something novel again and again. They explain it like this:

Falling down and kicking your legs may be a better stepping stone than trying to take a step (because kicking your legs is the foundation of oscillation, which is how walking works), but if walking is the objective, falling down is considered one of the worst things you can do.

They built a maze solver which would take considerably longer to solve mazes that were deceptive, meaning that they had deliberate dead-ends.

Images in Picbreeder are generated from a DNA-like code which can mutate to create a different but related images. Following the evolution analogy, visitors to the website can vote on images as a form of selection.

I did something similar with Evogami, but with a much simpler mapping from DNA to object.

These examples are all really neat, but all deal with very specific domains: simulated walking robots, mazes, images, simulated paper. How to go from these narrow fields to something as all-encompassing as evolution remains unclear to me.

The authors pose a good question: if single celled bacteria can do the job of reproducing, why bother creating more complex offspring?

all organisms begin their life as single cells and end up reproducing to create offspring who also start as single cells—and this simple strategy for reproduction is effective—what objective utility is there in doing the same thing, but in more and more complicated ways?

By viewing evolution as an open-ended search process, you end up with complexity necessarily.

As Stephen Jay Gould has pointed out in evolution, once all the simple ways to live are exhausted, the only way to create a new species or niche is to become more complex

In a sense, over eons our bodies have become a kind of encyclopedia of facts about the universe in which they exist. Eyes represent the presence of light in the universe. Ears signify mechanical vibration. Legs are reflections of gravity, and lungs of oxygen.

This is suspicious. Most organs in the body are pretty mysterious from this perspective.

A lot of this book rails against Perils of optimization and warns about maximizing meaningless metrics, along the lines of the McNamara Fallacy - choose meaningful metrics and the infamous cobra breeding story associated with Goodhart's law - indicators will be gamed. This reminds me a lot of Illich and the Two Watersheds - too much institutionalization discussion.

You show me anything that depicts institutional progress in America: school test scores, crime stats, arrest reports, anything that a politician can run on, anything that someone can get a promotion on. And as soon as you invent that statistical category, fifty people in that institution will be at work trying to figure out a way to make it look as if progress is occurring when actually none is.