Understanding How We Learn: A Visual Guide 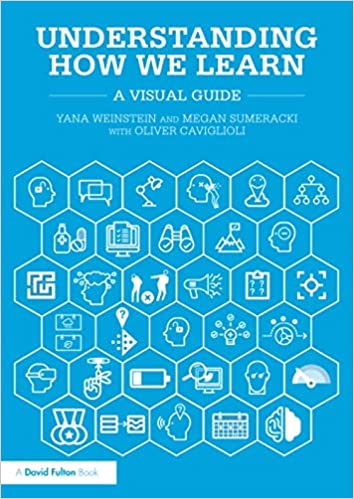 I read this book because it was recommended by C for work. This book serves as a nice visual summary of what we know about learning from a cognitive science perspective. The authors lament the large gap between what we know from this field and how educators do their job in practice.

Educational practices rely too much on intuition, and not enough on science. The authors make an analogy to medicine, and a scientific approach improved health outcomes dramatically around the turn of the 20th century. For examples, students read textbooks and notes repeatedly because it feels good, but this does not improve their learning outcomes.

Cognitive psychology can immediately debunk many myths in education:

Good start. But it's hard to learn from a bunch of negation. The meat of the book is covered by first introducing human cognitive processes, which serve as an underpinning for everything. Then, the real gems are in the following section, which articulates strategies for effective learning which were generated from theory, have been verified in the lab, and sometimes even in the classroom.

Sensation the output of sense organs. This will vary depending on your senses, but is generally objective

Perception your interpretation of the sensations. This is generally very subjective, and depends on the context and the person

One way in which perception is subjective is illustrated by Intensity of stimulus is proportional to the pre-existing stimulus, and logarithmic (Weber-Fechner law), which says that what you perceive is highly dependent on what you were just perceiving. This is true for both time and space.

Curse of knowledge refers to the problem that a teacher may know a lot more than the student, and lack the empathy to decide how to properly explain something so that the student understands. Reminds me of https://www.reddit.com/r/explainlikeimfive/

Attention is a limited capacity resource. If you work on a difficult task, all of your attention is required. A simple task will leave you with some left over attention. Cognitive load is a measure of how much of someone’s attention will be required to grok an explanation. The goal, then, is to minimize cognitive load but still convey the concept.

Attention involves focusing on one thing at a time. Multi-tasking for humans is similar to multi-tasking for machines: you end up duty-cycling from one “simultaneous” activity to the next. And this causes both activities to be done worse than if they were done sequentially. Nice demonstration:

Attention can be focused towards the salient. For example, it’s easy to look around and quickly spot all objects that are red at will. In education, saliency comes from the students motivation, interest levels, the way the material is presented. This is very related to the Krashen - Comprehensible and Interesting Input approach.

Attention can also be lost, and this is known as mind wandering. This happens more during easy tasks, but also during very difficult tasks. This is one of the benefits of being in the Zone of Proximal Development (ZPD).

In the chunking example, where the authors provide the characters of CHAPTER6ATTENTION scrambled in random order, I am finding that I can remember it better with a mnemonic. I guess this is sort of the point of chunking: it’s a way for more information to be stored in short-term memory, by relying on “chunks” that are already in exiting memory.

Why does attention vary between people? Three theories, but no consensus:

Working memory is modeled by a few components:

Memory is needed to do almost everything, from remembering names, to remembering how to do something, to doing basic things like comprehending speech, to having a coherent sense of self.

Memory representations in the brain

When we learn, new groups of neurons activate in response to the incoming information. Ideally, these just active neurons undergo consolidation. Connections to other engrams are strengthened to create a long lasting engram. Ideal conditions involve sufficient rest and sleep.

Consolidated memories become stored as long-term memories, which makes them available for retrieval. But consolidation is not a one-time event. Every time a memory is retrieved, it is subject to reconsolidation.

As soon as you encode something, you immediately start to forget it. Forgetting curves show an exponential drop off in retrieval performance over time. But forgetting is not a binary. Retrieval can be greatly helped for example by providing retrieval cues, which greatly increase performance.

Studies on brain-training games suggest that performance on the games does not transfer to real-life tasks.

Each of the following section introduces a study technique that has been shown to work through studies. Many of them overlap one another.

Ebbinghaus (1885) first showed that spacing repetition over time rather than massing them together (ie. cramming) led to better results long-term. This is replicated widely in RCTs in many contexts, seems like a pretty fundamental piece of the puzzle.

There is a well defined answer to the question “when should I be studying given that the test is on $DATE”. But how does this best work when there is no test, and the goal is just indefinite retention. Is this even a good goal? Surely there are benefits to forgetting things.

Interleaving: switch between topics while studying

Focus on the same topic during a study session will improve results in the short term. But long term studies show that results are dramatically better in the interleaved case.

Which concepts should be interleaved? Studies show that interleaving completely unrelated concepts (eg. Science concepts and foreign language vocab) doesn’t lead to especially good outcomes. Also unclear what the effect is on attention. Is it bad like multi-tasking, or good because it reduces boredom?

Elaborative interrogation: ask and explain how and why things work

Elaborative interrogation (EI) is a specific method of elaboration where you ask yourself questions of how and why things work, then produce answers.

Cousins include Socratic dialogue and the chain of why questions that toddlers and young children are famous for.

A study (Woloshyn and Stockley) found that EI led to better long term retention than re-reading the material. It worked in both an individual condition (self-asking and answering) and in pairs (one asks, the other answers, WLOG).

Performance was even better if an adequate answer to the question was produced by the student. But only works if background knowledge high enough. Otherwise better to read for understanding. Caveat

It helps to ground an abstract idea by giving concrete examples that tie back to the concept. For example, the notion of scarcity can be described abstractly:

Abstract: the rarer something is, the higher it’s value

But seeing this for the first time may be hard to internalize, so providing a variety of examples is worthwhile:

Concrete: if you buy an airplane ticket 4 months in advance, there are many open seats on the plane and the price is low. If you buy last minute there are fewer (scarcity), and so their value is higher and the ticket costs more.

Even better is to provide multiple examples, from different domains. Given the above example, one about buying sports tickets would not be illuminating. But an example around water scarcity during a drought might be worthwhile.

Pictures are often remembered better than words, so the idea is to combine words and pictures to enhance learning. These can be diagrams, infographics, cartoon strips, etc. Presumably the same would apply to other mediums like video.

Combining modalities is helpful for all learners, not just those that like pictures or think of themselves as “visual learners”. Also, Learning styles are a stubborn myth.

One pitfall is to include visuals that are distracting because they are:

The goal is clear and simple diagrams related to the target text.

Retrieval involves reconstructing something you’ve learned in the past, from memory, and thinking about it right now. The key part is that retrieval is done from memory, as opposed to having the reference material in front of you. (Abbott, 1909)

Direct benefit: retrieval practice is highly effective for long-lasting durable learning. This practice has been consistently shown to be more effective than repeated reading. It improves not just the memory’s durability, but also flexibility, helping make more far-reaching inferences. (Roedigger and Karpicke 2006)

Indirect benefit: students and teachers get feedback about what they know and don’t know. A computer system can track what students do and do not know.

Because memory is reconstructive, accessing it repeatedly might send signals to the brain that this bit is important. But a lot of the underlying principles of why retrieval practice works aren’t known yet.

Many possible forms of retrieval practice:

Need to be ZPD: If a retrieval task is too hard, students will be discouraged. If it’s too easy, they will be bored. Need to be in the Zone of Proximal Development (ZPD), while retaining Desirable difficulties.

Feedback > no feedback: Authors discourage letting students self-grade. You can address their misunderstandings directly if you have an idea of what they got wrong.

Delayed feedback?: Giving some feedback is better than giving none. But supposing we can give feedback, there’s also the question of when to best present it. But then there’s the danger of thinking they answered correctly when they were in fact incorrect.

Scaffolding: retrieval practice should be modified for some learners

Interesting if not directly related: this doesn’t work well on 4th graders, because the task of writing out everything they know on a blank sheet of paper is daunting. Young learners have a very low (9%) recall rate after reading a passage.

Solution might be to help them review the material first, which is called scaffolding. One example is to give a partially completed concept map based on the passage, then have the student fill out the rest, then do the recall. This has been shown to be very effective.

Look into this idea of “guided notes” for a subject. Take notes on a worksheet with cues and blank spaces, so that you are forced to take notes about specific concepts covered in class. (Konrad, Joseph & Eveleigh, 2009)

Again that damned study about how taking notes by hand is a better way to retain memory than by computer. (Muller & Oppenheimer 2014)

Spacing practice is hard to get into. Authors suggest getting students to do personalized scheduling so that they can squeeze spaced retrieval sessions in on a daily basis.

How to apply these strategies in AI-assisted learning

Elaborative interrogation: I wonder if it would help to let learners take one of the sides and the AI takes the other? Here's how it might work:

Quiz short answer grading: Can LLMs be used to grade short answer questions for how well they match the model answer? Anki and Orbit don't do this at all.

Scaffolding: concept maps: Can LLMs be used to provide scaffolding? Perhaps a concept map can be intelligently blanked depending on skill level?