Tools for Conviviality by Ivan Illich 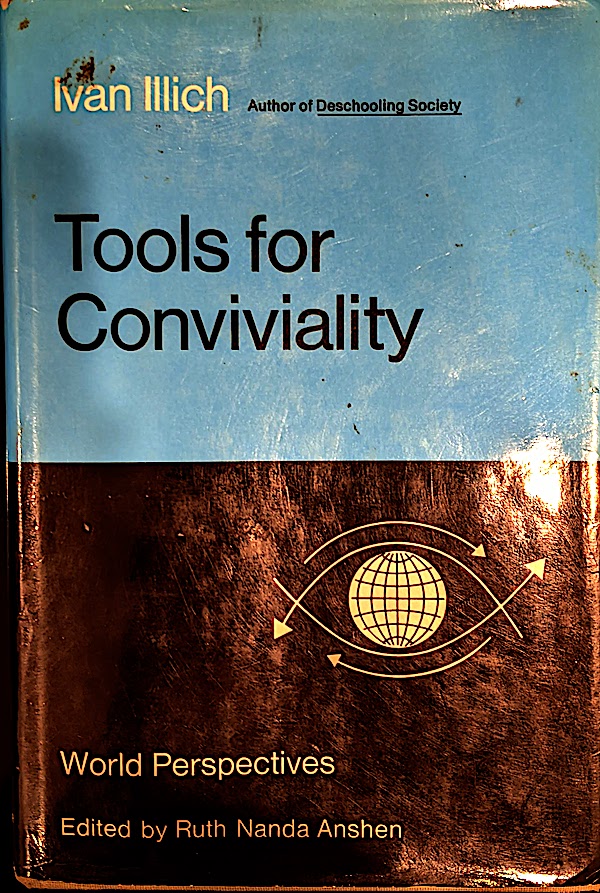 My main objection to Deschooling Society was that Illich completely neglected the babysitting aspect of the institution. With that out the window, feels like a reread is in order. However, I donated Deschooling to the LFL at work, but happened to have a copy of Tools for Conviviality. So here we are!

I found this book easier to digest than Deschooling. Perhaps I knew a bit better what I was getting myself into? By the way, book PDF is available.

Two Watersheds: too much of a good thing

Illich’s core critique of modernity is that modern tools, broadly defined, have great benefits, but they have been over applied. As a result, many areas touched by modernity pass through two watersheds:

These dangers of “over efficiency” remind me a lot of Seeing Like a State, which explores limits of naively applied high modernist thinking. Illich writes:

“There are two ranges in the growth of tools: the range within which machines are used to extend human capability and the range in which they are used to contract, eliminate or replace human function.”

Illich’s main critique of modernity is that people are trained by social institutions to be tool operators. Instead, tools should be simpler to operate and adapt to the tool user.

Illich despises overdevelopment, especially insofar as it paves over the heterogeneity of human civilizations. The ancient Thai system of canals enabled farmers to travel with cheap light boats. Many of these canals were literally paved over with highways. A culturerally unique, perfectly functional system was dismantled in the name of homogeneity, all because of greed on the part of developers.

A convivial society would be one which imposes limits on consumption. Illich is opposed to most power tools since they are centralizing in nature. Cars require a network of paved roads and gas pipelines. Modern life requires a centralized electric grid.

This line of thinking leads to some pretty radical conclusions: “Commuter transportation leads to negative returns when it admits, anywhere in the system, speeds much above those reached on a bicycle. Once the barrier of bicycle velocity is broken at any point in the system, the total capital monthly time spent at the service of travel industry increases.” I’m calling bullshit on this one. Light rail and subways seem like a pretty good way of getting around.

I do like the vision of being basically contained in a very small pedestrian and cyclist friendly area for most of ones existence, interspersed with occasional long haul rail travel. An electric cargo bike is a perfect tool to do all shopping for the family, though this would necessarily exclude trips to Costco. Long-haul train rides are already quite pleasant. And Illich would be glad to know that Amtrak’s Seattle \<=\> Vancouver route currently averages about 20 mph. In terms of reducing air travel, I could see a lifestyle in which one spends 3 months in a remote staycation, half vacationing and half working from another country every couple of years.

To his credit, when it comes to rate of growth, Illich acknowledges that some change is good: “A changeless society would be as intolerable for people as the present society of constant change. Convivial reconstruction requires limits on the rate of compulsory change.” Geoff West has expressed similar sentiments in Scale.

Ultimately, it is a balancing act, and I agree with Illich that as things stand, our collective societal balance is off. Here are Illich’s “five dimensions upon which the balance of life depends”:

I found this concept fascinating, and apparently it’s Illich’s own. A radical monopoly is when the dominance of one type of product supersedes dominance by any one brand. For example, cars do a lot to monopolize the way that people get around in many American cities.

“I speak about radical monopoly when one industrial production process exercises an exclusive control over the satisfaction of a pressing need.... That motor traffic curtains the right to walk, not that more people drive Chevies than Ford's, constitutes radical monopoly."

“Leisurely scientific research does not exclude a bevatron or some ultracentrifuges; removal of access restrictions now created by schools would again admit the curious, rather than the orthodox, to the alchemist’s vault; and study for its own sake would produce more surprises than team research on how to eliminate production snags.”

Sounds like a really promising research ethos to me, meandering and passion driven, and more fundamentally basic. But unfortunately, this is something that is only available for independently wealthy gentlemen-scientists. Or perhaps beneficiaries of ARPA grants of yore. That said, some small, nascent research groups like Ink & Switch, Dynamicland, and Otherlab appear to still operate similarly.

Illich seems to be deeply influenced by projections from Ehrlich’s “The Population Bomb”, which never came to pass. He considers contraception as an especially convivial tool. Side note, Barry Commoner’s response to this Malthusian trap was described in The Closing Circle (1971) was a far less radical, level headed approach, suggesting that as poor people became richer, they would have fewer children, and the population would stabilize.

Illich calls for austerity, the need to self-limit, and slow progress in an attempt to fix society and make it more convivial. This is going to be a bitter pill for many to swallow, and Illich understands this well. I think you need a much more clearly positive vision for the future. I admire Rewiring America for taking a stab at this.

As usual, Illich does a good job of critiquing society, but path to specific solutions remains murky. Especially when it comes to the last sections on law and on politics, the writing becomes noticeably more vague, as if the author himself appears somewhat hazy on the right course of action.

Thus, how to move a whole society towards Illich’s post-industrial convivial vision is unclear. The main way in which I can see operationalizing it is by changing one’s personal life to live more convivially: live near work, walk and bike more, genuinely care more about others, do less busy work, home school your children, be present for major life events, build your own house, host more guests, etc.