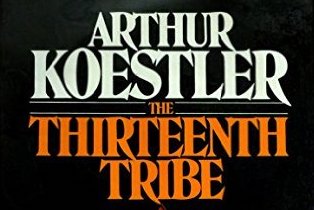 The first half of the book focuses on the facts. Who were the Khazars? Who were the Rus? Where did these people come from? How did they interact with dominant Byzantines, Ummayads, Abassids? It's super readable and more engaging than prior lectures on the subject matter. That said, I feel that having listened to Early Middle Ages was a bit of a prerequisite. It would have been too hard to keep track of the major players otherwise.

In contrast, the remainder of the book is way more speculative. Koestler seems to have started with a thesis: Ashkenazi Jews are Khazars. A narrative then is carefully constructed gather the relevant evidence. However given that this is all set in Dark Ages, the facts are inherently sparse and shrouded in uncertainty.

The Khazars converted to Judaism because choosing Christianity or Islam would put them under the authority of either Baghdad or Constantinople. Their decision to convert may have been mostly a pragmatic one on these grounds. Reminds me of that quote attributed to Napoleon:

The Khazars adopted Hebrew script too. Some Hebrew letters, ש and צ made it into Cyrillic as ш and ц, after St. Cyril learned their language in Crimea.

Becoming a neutral territory meant that those fleeing forced conversion in Christendom and Islam world had a natural safe haven. Many Greek pagans and their rich classical traditions found their way to Khazaria. So did many Jews of the diaspora.

The conversion is chronicled by a Khazar king Joseph, in an exchange of letters with Hasdai ibn Shaprut, a Jewish doctor living in Al-Andalus (modern Spain). In his response, Joseph recounts the Khazar conversion story. After dropping idolatry, King Bulan, sometime in the 8th century needed to choose between the three dominant religions. He gathered a panel of representatives and asked each separately which of the other two religions were least wrong. Judaism won by elimination, since both Christian and Muslim had greater affinity to it than to one another.

The Khazars seem to have been karaiites, meaning that they rejected the rabbinical teachings completely, and only followed the Torah. Meanwhile the rest of the diaspora, concentrated largely in Baghdad and large cities in Al-Andalus like Cordoba, practiced rabbinical Judaism, with a Gaon at the head.

The Khazars were a Turcik people ruled by a system of dual kingship. The Khagan was the nominal ruler and figurehead. Menawhile the general executive and military general was called the Khagan Bek. Upon end of reign the Khagan was ritually killed.

Khazaria was a buffer state situated between the Black Sea and the Caspian Sea, shielding the Byzantine Empire from both Vikings and Arabs.

Perhaps there's a map in the printed version of this book, but I listened to it and found myself floundering a bit on the geography front. Embarassingly I found it hard to keep all of the rivers (Volga, Dniepr, Don, Ural) straight. I spent a bit of time and put all the things on a map, including two major cities, Atil the capital, and Sarkel, the remains of which were flooded by the Soviets in the 1950s.

The Varangians were Vikings. In the 9th century, they set out on large expeditions with the goal of raiding, trading, and sometimes a combination of both - "forced trade", as Koestler politely puts it. A typical raiding party would be composed of 500 longships of 100 people each. Vikings didn't usually establish permanent settlements outside of their traditional territories, but the Varangians were an exception.

When this group of vikings moved into the territory of modern Ukraine and Russia, they settled down near Kiev and became known as the Rus. They intermingled with native Slavs. Olga is Helga, Oleg is Helgi. Ivan, Ingvarr. Vladimir, Valdamarr. Mind, Blown.

Early Kievan Rus was a shit show. After Igor son of Rurik was killed by a tribe of Slavs called the Drevlians, his wife Olga exacted sweet revenge on them. Igor and Olga had a son, Sviatoslav, who was also a military hero and legendary warrior. Their children caused a civil war for succession. As Koestler would have us think, most of these early Rus regends tended to lead debaucherous lives and then convert to Christianity on their death bed. Some to be subsequently canonized.

Vladimir, son of Sviatoslav decided it was time to pick a religion. He did so in a Khazar-like fashion. Summoning delegation of representatives. The result is described by the chronicler Nestor:

Khazaria and the Byzantines had a long standing alliance. But with price Vladimir’s conversion to orthodoxy, a union Of the Rus and Byzantine was cemented, paving the road for a joint campaign against Khazaria which was already weakened by then.

Additionally, the Khazars levied a 10% tax on traders going through their lands. This ticked off Viking Rus who were capable of trading and raiding.

Sviatoslav destroyed Sarquel and Atil. He had a reputation for having Berserkers in his ranks, from norse legend.

"The Rus' attacked, and no grape or raisin remained, not a leaf on a branch."

After the Khazar empire collapsed

Chronologically, first the Khazar empire fell, then new Jewish settlements began to spring up in Poland. Clearly there was some flow between one and the other, but experts disagree how much of the population came from Khazars and how much from Jews ethnically tracing back to ancient Israelites. Koestler suggests that most Jews in Poland came from the Khazar empire, while a mere trickle joined from Spain.

Around this time the Shtetl began to emerge in Poland-Lithuanian empire. Origin dates to the 13th century.

Interesting connection between the kippa and the Tubeteika, or traditional headwear of steppe dwellers.

A chronicle of suffering

During the crusades, many Jews were forced to convert and many communities chose to self-immolate and die as martyrs.

Many Jews of Maeonce, Strasbourg, Spires, ... escaped from centers and left their posessesions to kindly Burgers.

A big part of Koestler's thesis is that the differences between Jews and gentiles living in the same country are much smaller than difference between Jews living in different countries. Thus he claims that there is no real such thing as a Jewish race.

Apparently Koestler told French biologist Pierre Debray-Ritzen he "was convinced that if he could prove that the bulk of Eastern European Jews (the ancestors of today's Ashkenazim) were descended from the Khazars, the racial basis for anti-Semitism would be removed and anti-Semitism itself could disappear".

Koestler attempted to discourage misuse of his theory by hedging extensively in the conclusion, saying that Israel's right to exist is based on the UN mandate and not on Biblical covenants or genetic inheritance.

Sadly, Koestler's theory has been used extensively by Arab anti-Zionists, and white supremacists alike. Anyway, the first half is great, but the remainder can be safely skipped.

That all said, this Khazar question is historically fascinating, shrouded in mystery, and full of people on both sides, exhibiting classic motivated reasoning. We'll see where I eventually land.