Thinking in Systems: A Primer 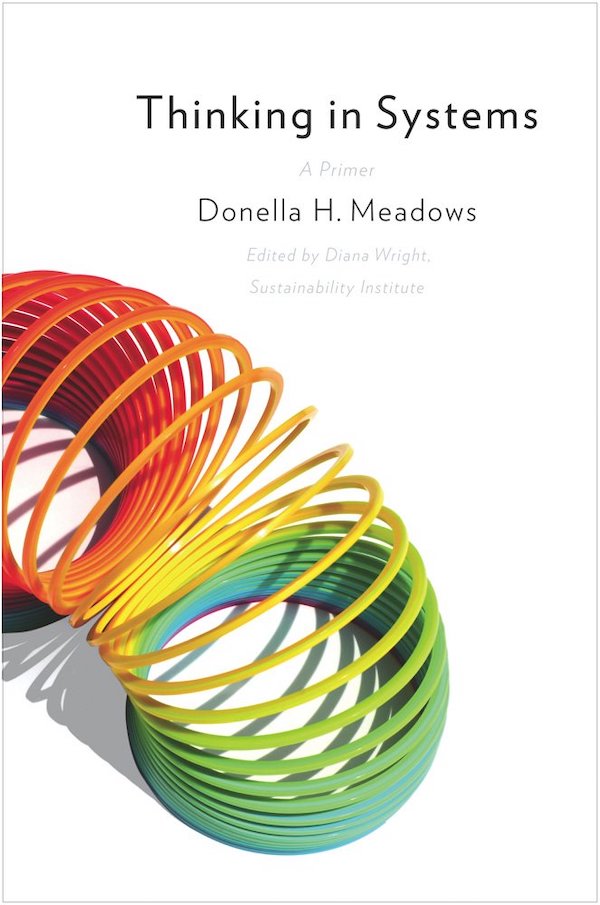 Thanks to a book club at work, I finally read this legendary book.

A system is a set of entities interconnected to produce behavior over time in response to external events. For example, a slinky's behavior lies within the slinky itself.

Modernist thinking tends to like simple causal connections. However reality is complex. Systems thinking is an interesting and valuable lens that complements high modernism.

One way of looking at systems thinking is as a formalization of folk wisdom:

System components in order of importance:

Systems are composed of stocks and of flows. Stocks are the amount of a thing. Flows are the increases or decreases of said thing. Think of a bathtub with a faucet and a drain. The water in the bathtub is the stock. The faucet is the flow of water in. The drain is the flow of water out. Flows can change quickly: you can shut on and off the faucet, plug the drain. Stocks change slowly and act as buffers: even if you open the drain completely, it will still take a minute for the water to vanish.

One amplifying and one balancing loop (eg. Population Growth)

Ultimate behavior will depend on which of the two dominates. If reinforcing dominates, end up with exponential growth. Many other examples like this, such as capital growth, where the more capital you have, the more you can make, but there's also depreciation costs.

Stock 2: Coal. 1. Balancing: as the coal mine depletes, it becomes harder to extract the last bits of coal.

Stock 2: Fish. 1. Amplifying: the more fish there are, the more fish are born. 2. Balancing: as the population dwindles, it becomes harder to find the last fish.

Delays really matter in reality many of these loops are driven by information that is delayed. This results in oscillations.

Stable intermediate forms: another important concept. Hierarchies mean that there are independent sub-systems which are independently stable. This enables a rise in complexity.

Limiting factors are an intuitive but important idea. A systems is affected by the stock that is in least supply. As a system grows, the most limiting stock may change.

Resilience involves many balancing loops, most of which are inactive most of the time. Example: under normal circumstances, you don't sweat or shiver. But without these abilities you would be far less resilient.

Firstly, what a great collection of insights! But to call it a coherent book is a bit generous. I feel like it's not well structured, and found myself picking out nuggets rather than being swept away by a coherent narrative.

Systems thinking is a great technique for CEOs, businessmen, macroeconomists. It's less clear how a pleb like me might apply it. But it's still interesting!

It would be worthwhile to contrast the causal diagrams of the sort Judea Pearl champions with these systems feedback loop diagrams.

Praise ignorance, for what man has not encountered he has not destroyed. - Wendell Berry

Systems have common failure modes. Here are some of the ones I found novel. The remedies are often easier said than done.

Policy resistance. many actors are all invested in an equilibrium involving one stock. Each pulls the supply up and down to their own benefit. Everyone exerts a lot of effort but achieves little. Remedy: let go. Find another thing all parties can agree on.

Tragedy of the commons, a common resource or sink is overused by each user, leading to ultimate ruin because of erosion effects. The term was coined much later than I thought: in 1968. Remedy: either apply pressure appealing to morality/decency/religion, split and privatize the commons, or impose penalties for overuse.

Drift to low performance, a gradual degradation in quality because of a moving performance goal. If quality is under the bar, the bar is set lower, often excused by sentiment like "it's not that much worse than last year", etc. Remedy: Keep performance standards absolute. Even better, let standards be enhanced by the best actual performances instead of being discouraged by the worst. Invert the pattern and set up a drift toward high performance.

Escalation. Cycles of violence in conflicts between countries. Negative political ad campaigns that render both candidates unpalatable. Remedy: disarmament. This can be unilateral or mutually agreed upon, but the latter requires mediation.

Success to the successful is a common situation. The more money you have, the more of it you can make through investments, etc. Remedy: Jubilee? Potlatch? Antitrust laws? Estate taxes?

Dependence, including personal addiction, but many other things. Societal dependence on institutions like healthcare, etc. Remedy: focus on long-term restructuring rather than short-term relief.

Rule beating. Example: spending all available budget just to ensure that next years isn’t reduced. Example: only slowing down if there's a police car nearby. Remedy: redesign the rules!

Wrong goal, a common situation where a system pursues a goal that does not actually reflect desired outcomes. Reminds a lot of McNamara Fallacy Remedy:

Most attributes of the system are effectively immutable. Structure of the flows is often physical. Delays are often unavoidable. Information flows in feedback systems are where most leverage lies.

Unbridled growth with an amplifying loop is rare because such systems quickly lead to either: - Exhaustion of resources (eg. No more bodies to infect) - Balancing loop dominates (eg. Greater precautions and PPE)

Slowing growth may bring stability to a system. Reminds me of this tweet:

For every hundred people telling us to "just install more solar panels", only one person will consider ways to reduce power usage.

Make invisible information visible. During the oil embargo in 1970, the Dutch began to pay attention to power consumption. Some houses mysteriously seemed to use 30% less power than others. The difference was in location of the power meter. Those with low power usage had meter in the lobby. Others had the meter in the basement.

Re-write the rules. Interventions into the system's rules are very effective. This explains why lobbyists are powerful.

Encourage self organization: allowing a system to self organize is extremely powerful. But this may lead to unknown conclusions, so is not well loved by those in power.

Goals matter. What is the ultimate goal of the system? What’s the goal of goog? What’s the priority order of many competing goals? Sometimes a leader can do this. Hitler profoundly changed the goals of Germany in the 1930s. Reagan changed the American ethos from “Ask not what your country can do for you – ask what you can do for your country.” to “Government is not the solution to our problem, government is the problem.”

“If you want to build a ship, don't drum up people to collect wood and don't assign them tasks and work, but rather teach them to long for the endless immensity of the sea.” - St Exupery

Paradigm shifts and meta paradigm awareness. We live in a world with many unstated assumptions, hidden goals, biases. Changing these is the higest leverage point.