The Protestant Ethic and the Spirit of Capitalism by Max Weber 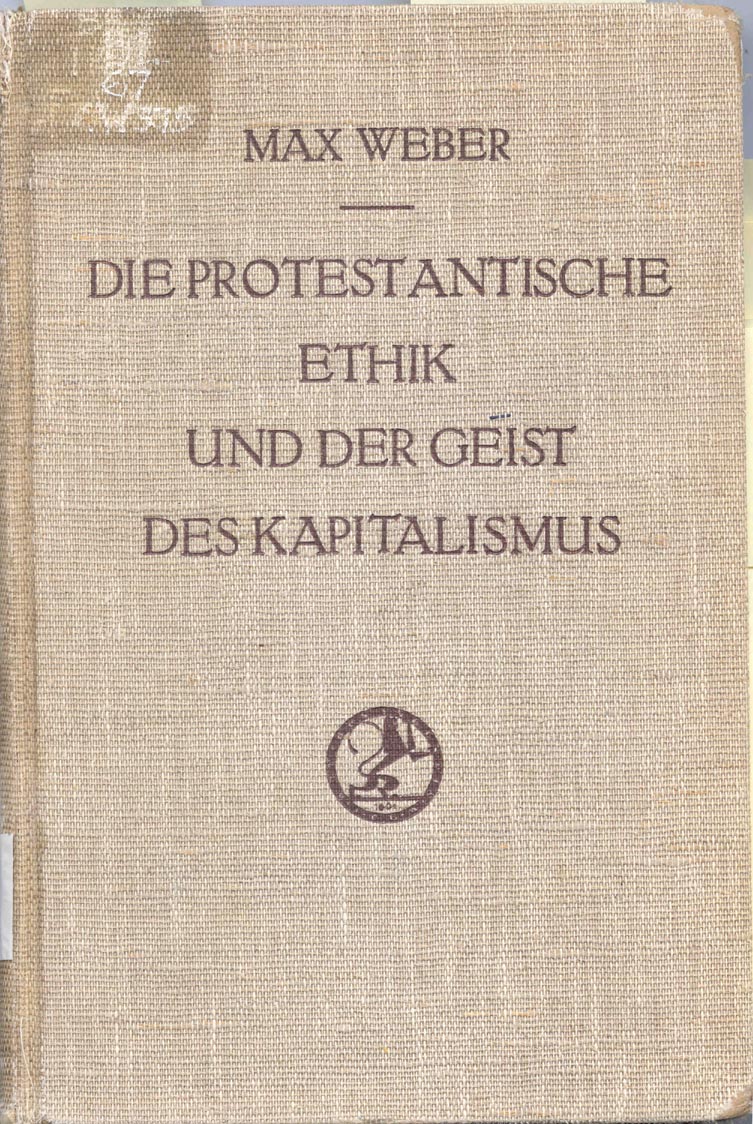 Max Weber piqued my interest in an overview course in philosophy The Modern Political Tradition - Hobbes to Habermas. I took a note about Weber's ideas then:

Work is good in itself, a sign of higher character. Modernity is all about instrumental rationality: refining means to achieve ends. Modernity is polytheistic. Each context provides its own value. This leads to a permanent identity crisis. Weber’s options are: bear with it or return to an all encompassing religion. (Protestant capitalism)

When GB suggested that Weber's translated works were readable, I decided to take the plunge. Weber is sometimes long winded. The last sections seem to go deep into narrow protestant sub-sects and associated thinkers. Zinzendorf, Herrnhut and the Pietists were just a bit too much for me. I found this section to be repetitive and overly detailed. But other times, the text was so dense and rich I actually had to slow the audio book narration to below real-time, which is a first for me. If you are tempted to skim, be sure to read the last chapters.

According to Weber, Protestants in general are characterized by a strong piety and a remarkable proficiency at their trade.

When I think of a devoutly religious person, I think of them giving their whole life to god. My intuitive model is that of the Baal Shem Tov who spent every waking minute reading the Torah. Or a “athlete of god” who turns to extreme asceticism as a reaction to excesses of the established clergy.

Weber makes a sharp distinction: the Protestant work ethic is diametrically opposed to 1) joie de vivre and also to 2) aspirations for worldly progress. Instead, this work ethic is one tied to a deep faith. He cites Montesqieu, that the English have "progressed the farthest of all peoples of the world in three important things: in piety, in commerce, and in freedom." Weber's work focuses on the relationship between the first two.

Economic traditionalism is exemplified in (1). But capitalism is mostly (2), an acquisitive economy.

The acquisitive economy relies on money and wealth as a measure of how well you have done your job.

The idea of a calling irrational and is associated with Protestantism according to Weber. He will tease this out in chapter 3.

The Calling: from monasticism to craftsmanship

Luther said that the fulfillment of worldly activity is the best way to worship the lord.

In the early Catholic Church, the notion of a calling was often applied to a monastic lifestyle. Worldly duties were derided. The individual should stay in the station he was given at birth and glorify god.

Luther translated this notion into something much more worldly. Religious authority was not reduced, but the calling could force you to pursue a path divergent from the station provided at birth.

The emphasis thus shifted from an unending glorification of god to a creation of god-glorifying works, fruits of your craft. I think of J. S. Bach as an exemplar of this attitude. Even mom has said that at her best, her hands are moved by god's grace.

The emphasis on works reminds me of Never Let Me Go by Kazuo Ishiguro, in which students' works are harvested in order to prove that clone-students are worthy of salvation.

Brief aside on protestant sects

I've always found protestant denominations to be very confusing, and here's a diagram I found helpful.

I also spent a couple of hours trying to understand a bit beyond what the book has to offer, and here are my findings:

Predestination and its implications

The strongest formulation of Calvinist concept of double predestination was that before birth, all people were destined to either go to heaven or burn in hell, regardless of their deeds. And which bucket you fell into was unknown until your death. For Calvin, man is created for god, not god for man. His decrees thus don’t need to be pleasant in the slightest. For the damned to complain of their lot is the same as animals complaining that they were not born as men. For god to change his mind on the basis of some earthly human actions would diminish his power. Puritans share the same view of predestination as Calvinists.

This was a huge difference between Catholicism and Calvinism/Puritanism: for the Puritans, no amount of sacrament or worship was going to get you into heaven. So they deliberately avoided doing any ritualized burial, as that was seen as superstition. From this stemmed a general aversion to anything sensuous and emotional in culture and religion. These are no use towards salvation, merely deluding people via idolatrous superstition.

Against magic: For the Puritan, the Catholic tradition looked as if “the priest was a magician who performed the miracle of transubstantiation and held the key to eternal life in his hand”. As a result, they made their project to "eliminate magic as a means of absolution".

Individualism: This doctrine forms the roots of a disillusioned individualism. Bunyan's "Pilgrim's Progress" is the most read Protestant book. The protagonist named Christian abandons his family to escape from the "City of Destruction" (this world), to the "Celestial City" (heaven). Once safe, he remembers that he should probably also bring his family too...

Self-confidence: The elect and the damned do not differ in any way. This wasn’t a problem for Calvin, who felt himself obviously chosen. But for many others was not tenable, as everyone would wonder endlessly whether they are in a state of grace. The result is that all people must act with self confidence as if they are in a state of Grace, and avoid doubt at all cost. (The basis of high self confidence in the west?)

Unbounded piety: In this view, Catholics live with “hand to mouth” piety. They try to be good but inevitably stray from the ideal, and then need to offset their misdeeds via confession or sacrament. In contrast, the Puritan would need to act as if they were in a state of grace, constantly are outdoing themselves in their piety. There is no upper bound on piety if you are truly one of the chosen. (Does this piety then translate into money in the modern age?).

(Is there predestination in Judaism?)

This more modern interpretation of the calling is intimately tied to producing great works. For Lutherans it wasn’t enough to do righteous works. They insisted on an emotional component. For them, the feeling of grace was needed to actually attain salvation (aka state of grace). For a Calvinist this was just empty emotion.

According to the Puritans, works are not the cause but only the proof of a state of grace, and only if the works are done for the glory of god alone. He who did not perform good works was not a true believer. The harshness of Calvinism continues to astound.

At first Weber appears to lambaste Ben Franklin for being overly pragmatic as he describes the “spirit of capitalism”, in a passage from his autobiography. Franklin's virtues are all merely a means to an end. In the end, if you are virtuous, you will have good standing with money lenders. This uncharitable take is very easy to mock, and has been done effectively by Ferdinand Kurnberger, who in "Picture of American Culture" describes Americans thus: "They make tallow out of cattle and money out of men."

But Weber gives Franklin a much more charitable interpretation. Franklin's response to “why should money be made from men?” comes from his strict Calvinist father:

Seest thou a man diligent in his business? He shall stand before kings. — Proverbs 22:29

On Weber's account, Franklin philosophy as written in his autobiography is not greed at all, but a direct continuation of puritan ideals. Franklin was a self avowed deist, far less religious than his pious Puritan predecessors.

The Calvinist/Puritan tradition holds that (3) is acceptable, but the rest are sinful. If your calling happens to be entrepreneurship, then wealth of your company is basically the explicitly endorsed goal.

Another pious angle on accumulating wealth is one of eventually giving it away. This idea of "earning to give" is quite old.

And so Max Weber us forced into this mandatory system of a calling, works, originally set out as an optional path.

The Puritan wanted to work in a calling; we are forced to do so. For when asceticism was carried out of monastic cells into everyday life, and began to dominate worldly morality, it did its part in building the tremendous cosmos of the modern economic order. This order is now bound to the technical and economic conditions of machine production which to-day determine the lives of all the individuals who are born into this mechanism, not only those directly concerned with economic acquisition, with irresitible force. Perhaps it will so determine them until the last ton of fossilized coal is burnt. In Baxter’s view the care for external goods should only lie on the shoulders of the “saint like a light cloak, which can be thrown aside at any moment.” But fate decreed that the cloak should become an iron cage.