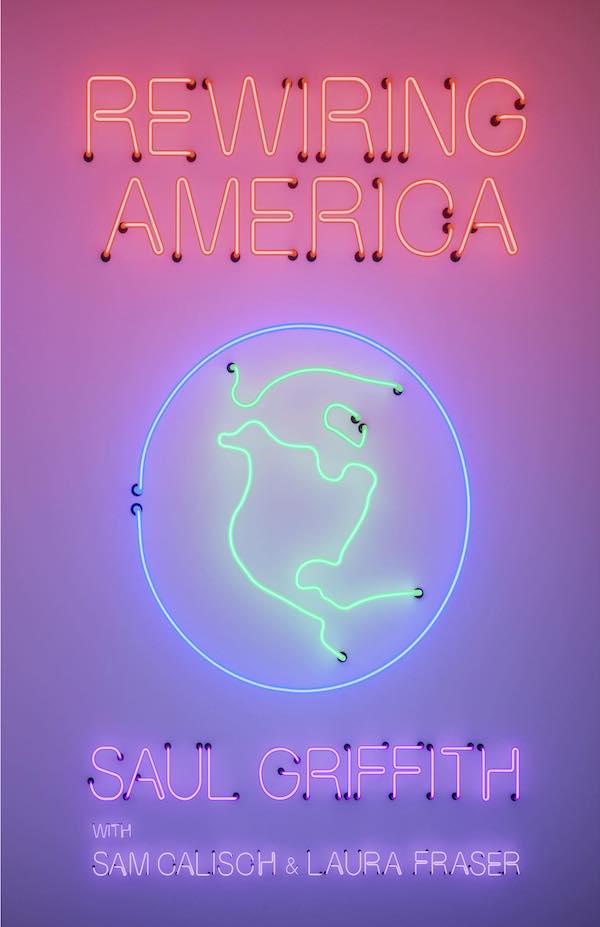 This is less of a book and more of a propaganda pamphlet, which can be succinctly summarized as follows:

The technical path to decarbonization is simply this: we must electrify (nearly) everything.

I picked this book up because I admire the author for being a prolific inventor and entrepreneur and seemingly chill dude. I once toured Otherlab thanks to my friend AK, which was awesome and inspiring. I rate it as worthwhile because it’s a bold opinionated bet, which is refreshing when the dominant climate narrative is “Honestly, we need to do everythinggggg”.

Like WWII mobilization. Saul’s position is that the only way to un-fuck ourselves and remain on a 2C warming trajectory is to do an “aggressive WWII-style production ramp-up of three to five years”. He adds some colour to the WWII era mobilization effort, painting a very shabby military picture as late as 1939, when “the US had only 1700 aircraft and no bombers. By 1945, the US had 300,000 military aircraft, 18,500 B-24 bombers.”

Positive enough vision? I strongly agree that we need a positive vision for 2020 and climate, but I didn’t find the one that he provides “If we build the right infrastructure, right away, the future will be awesome!” to be much of a rallying cry. Awesome how? Also I don’t believe in the vitality of a cry to defer gratification. Seems counter to the dominant culture.

California/Australia centric “Everyone should install solar on their roofs at the next opportunity, whether that be a retrofit, replacing shingles, or buying or building a new house.” makes little sense in many places that are less sunny year-round. For example according to project Sunroof, doing this on my house would cost me $2000 over 20 years, with a $20,000 cost up-front. Similarly, I just bought a hybrid vehicle, but buying an all-electric one would cost either 50% more, and waiting 2 extra years (RAV4 Prime) or 100% more if it’s the Tesla Model Y,. And I don’t have a good place to plug a PHEV in. Plus full-electric precludes a bunch of stuff like going on hikes and driving on shitty roads. Suspect people in apartments have even less opportunity for a plug-in. And I’m super rich and on board with this whole climate thing.

Innovation in consumer loans Revolutionary mortgages and low-interest loans were in the 20th century. I’ve have heard him speak about this before in a Long Now seminar, and this remains compelling because of the possibility of changing behaviour at scale. “America’s lifestyle has been built on loans. Creating a climate loan in response to the climate crisis has clear historical precedent.” While true and interesting, car loans enabled people to own a car, and mortgages enabled them to own a house. A climate loan has no selfish benefits. This revolution has to be a government-sponsored thing, just like WWII didn’t require individuals to like take a loan in order to buy a tank for the war effort.

Rosy battery cost projections for batteries are a bit optimistic… Saul projects $75/kWh by 2024, a random graph I just found suggests more like $96/kWh by 2025. The challenge of multiple uses and battery degradation remains. Especially if one buys a large battery for their house, or expects to be driving an EV for 250,000 miles like we did the Toyota Highlander.

Why Makani shut down. It which was aiming to produce wind energy at 3-4 c/kWh, 5-6 times cheaper than other wind-powered electricity at the time. Now wind power is 4-5c/kWh. “In 2020, Makani shut down due to this evaporated advantage.”

General gripes about regulation. Great example with SF roof solar panels not being allowed to extend to the edge of the roof. Instead they must be set back 4’, which in practice eliminates 44% of the area.

Central planning would be nice. A section about electrifying 250 million vehicles, 130M households, 6M trucks, etc reminds me of how much easier such a monumental task would be in a country like China, if they set their mind to it. And it’s easy in this case because you actually know how much of everything you need, because you just replace all of the existing things with electric versions.

Carbon sequestration doesn’t work. Makes sense to me not to focus on sequestration at either smoke stacks or from atmosphere because science. Makes physics sense and also corroborated by Mark Lynas in this episode of 80,000 hours.

Carbon taxes ineffective, politically fraught (I think that the main suggestion of this book is more politically fraught than passing a carbon tax.) Saul argues that it’d take too long to see the effects of a carbon tax, and that electricity is becoming so cheap as is, that it won’t really matter. Maybe. I don’t think this is happening fast enough. I think many Americans buying cars in the next 5 years will opt for gasoline or hybrid solutions rather than electric ones. But a carbon tax might shift the numbers.

Yes and… Nice little FAQ at the end, but spread pretty thin. Blanket assertion that “The rare earth metals used in high energy magnets and electronics are actually not as rare as their name implies.” No source. Also kind of sloppy rejection of self driving cars as a potentially good thing, ignoring possible benefits of automated fleets and more densely packed passengers. Electric aircraft? This is still science fiction, hasn’t been done.

Overall I found the message to a bit monistic, but also pragmatic. I liked the outright rejection of approaches like CCS that won’t actually work. And hard boiled assessments of individual actions that are admirable but ultimately won’t be enough, like eating less meat.