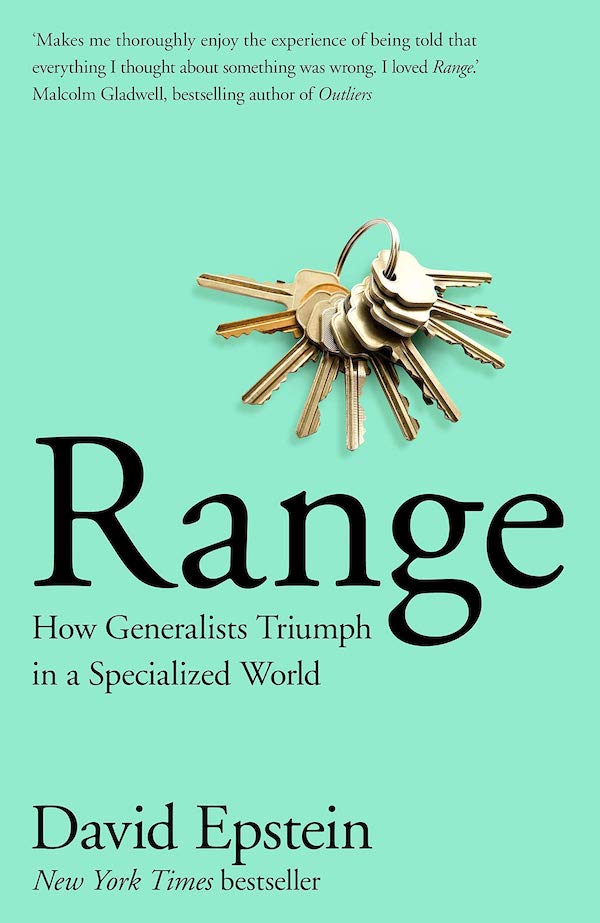 I learned of David Epstein through his interview with NonProphets, a podcast I enjoy listening to. He had featured one of the generalist podcast hosts in the segment about super forecasters, and came off as super interesting. I had just committed to sorting my reading list by least recent publish date, biasing it towards works that have stood the test of time. But looking over my options in Audible, I kept coming back to Range.

Anyway, it was worth it, although it took me longer to get through than I expected. Partly I’m reading too many books at once, and partly it got a little slow towards the middle and I lost interest when it covered some familiar territory (eg. Superforecasting).

It’s hard to summarize the book in a sentence, since it tries to integrate learnings from many people from many disparate fields into a coherent narrative.

Savants and other specialists do really well in areas with well defined rules: “kind” domains. Examples include games like Go and Chess, and answering trivia questions answer to which is well known. Kind problems have robust statistical regularities. But most real world problems are “wicked”: many complex considerations, many variables, and no scenario is quite like the next.

Dark horses: Making an impact in a novel field is inherently inefficient. You can’t just wake up one day and decide “I’m going to change this field”, and follow a narrow path to do that. Hundreds of people have already tried doing this. A more circuitous route is more likely to yield something novel. Rather than obsessively focusing on a narrow topic, creative achievers tend to have broad interests. In a study, vast majority of successful people followed a circuitous path to get to where they got, but believed that “most people don't do it this way”. Dark horses don't worry about falling behind or comparing themselves to peers. Instead they optimize for match quality. Examples of successful people that take winding paths:

Gunpei Yokoi is my new hero. He started Nintendo's electronics division and instilled the company with “Lateral Thinking with Withered Technology”. Yokoi held that toys and games do not necessarily require cutting edge technology; novel and fun gameplay are more important. He suggested that expensive cutting edge technology can get in the way of developing a new product.

A finer hierarchy than the binary (foxes, birds, generalists) vs (hedgehogs, frogs, specialists) dichotomy is the hybridization of the two into “polymaths“ or t-shaped people. Not sure about the use of the polymath term though.

It gets even better when you combine the animals you like into one super animal: a flying, actively open minded t-shaped fox with dragonfly eyes. Creepy!

Desirable difficulties: the idea that learning requires effort. No pain no gain. And as a teacher, you should be creating situations where students are subjected to struggle. This means avoiding excessive hint giving. With too many hints and shortcuts you risk trading deep understanding for expedient monkey business. Speaking of which, really impressive study about macaques memorizing a pattern under various hint giving conditions. Super relevant to some of my current work.

Generation effect: merely attempting to produce an answer to a question before getting a hint or the correct answer has been shown to result in better recall results.

Cross-disciplinary sleeping beauties: Papers that include references from two journals that have never been cited from the same paper before (indicating a high degree of cross-disciplinarily)

Analogies are super powerful. Apparently Johannes Kepler relied really heavily on analogies for developing his laws of planetary motion. Kepler’s train of thought fancifully reproduced by the author is super enlightening. The benefit of analogy is that you can more easily take the outside view (Kahneman). “Evaluating an array of options before letting intuition reign is a trick for the Wicked world.”

Carter racing case study shows that people often to make decisions based on incomplete information https://www.academia.edu/20358932/Carter_racing_case. In a brilliant twist, the case is modelled after the Challenger Disaster.

One critique: it’s easy to create a compelling narrative by cherry picking facts. Certainly there are successful hedgehogs, and some child prodigies do change their field. Mozart, for example.