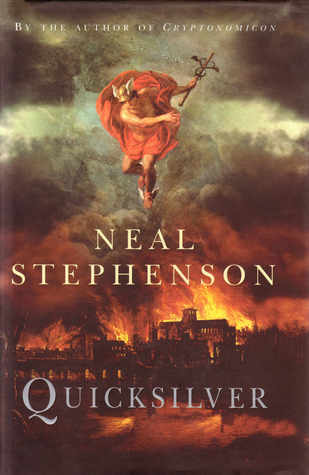 One of the better written Neal Stephenson books I’ve read so far. I found the first half especially engaging. Extremely varied, this book covers a lot of ground.

I found this to be an excellent example of fiction doing what non-fiction can only dream of: in this case, imbuing dry history with a soul. Stephenson masterfully guides his reader through the gradual evolution of bullion and coinage to bills, and the regression that follows the Dutch war. A far more entertaining vignette of something dryly described in Debt.

Waterhouse aboard the Minerva feels like a more fun version of Pirates of the Caribbean. Maybe I was especially into it since I’m sailing so much this year. Nice to see Stevenson using some antiquated sailing terms too. I learned that larboard is an antiquated term for port.

Part of the fun of reading Quicksilver is that, unless you cheat or happen to know many personalities from the 17th century, it’s hard to know whether a character is real or fictional. Daniel Waterhouse was so vivid by the end of it, I wasn’t sure about his status until checking.

The book feels a bit unfinished. For example, what happened to Enoch Root? Some passages are a bit rough, like the repetitive dialog with the Jew, who is continually called “The Ashkenazi”, “The Forelocked One”, “The Circumsized One”, etc. The last half felt a bit rushed, and the battle which Waterhouse solves with Trigonometry was a bit of a stretch!