The Psychology of Curiosity

I read an academic paper on curiosity by George Loewenstein. It was surprisingly readable and very insightful.

Why did I read it? Just like some think about thinking, others are curious about curiosity. More specifically, I recently read a Vox article that suggested "The more scientifically curious people are, the more they are immune to the power of partisan thinking". What follows is mostly a summary of the article, as well as some sketches I made to help me understand it better.

Dark side of curiosity (it can be a vice):

Unclear if perceptual & diversive curiosity should be called curiosity, or something else?

Conceptual controversy increases curiosity (experiment where students were put into groups intended to either foster conflict or consensus: 45% of controversy kids gave up recess to watch a film, vs. 18% in consensus group).

Implications of the gap approach

More curiosity for insight vs. for incremental problems (study: 1. image-grid where each cell was part of one animal vs. 2. each cell is its own animal, subjects open more cells condition 1.)

Paradox: if you don't know much, no real drive to learn more. Also, many people don't know that they don't know a lot (Related to Dunning–Kruger effect.) 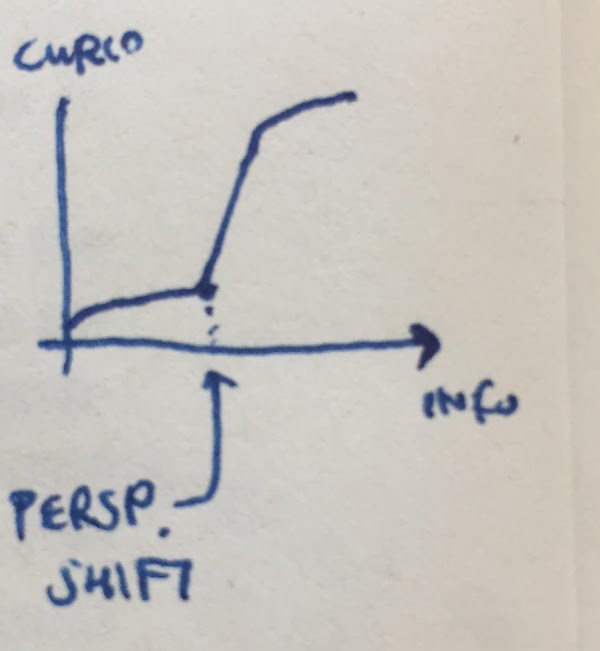 As a novice gains more knowledge the "unknown unknowns" become known unknowns, which spurs curiosity. As you learn more, the gap closes and you become less curious. Until there's a leap, your reference point changes realize your ignorance again.

A good way to cause awareness of the informational gap is via guessing and feedback. It's difficult to deny the knowledge gap if you guess an answer incorrectly.

Combination of guess and feedback increased curiosity (study: one group had to first guess Easternmost, Northernmost, Southernmost states (w/ immediate feedback) while the other didn't, and the one that did guess & feedback was more curious)

I should read William James' on scientific curiosity, since it's most relevant for that Vox article, and also mentioned by Loewenstein as the type of curiosity that mostly corresponds to specific epistemic curiosity.

I printed the paper, but the last page didn't come out. So I experienced the recently learned Zeigarnik effect: people remember uncompleted or interrupted tasks better than completed tasks. I was very curious to see how the paper ended, so had to finish reading the last page online.