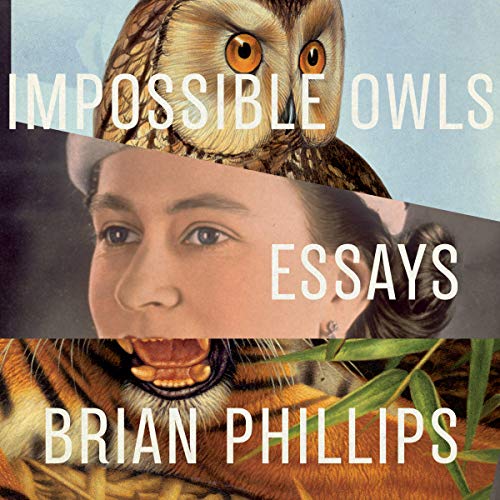 It's hard to call these essays, because they have a tinge of magic to them, despite appearing to be completely factual. It's as if the fictional genre of magical realism has somehow found its non-fiction counterpart? Anyway, as A says, the boundary between fiction and non-fiction is overrated.

Enough philosophizing! I enjoyed this collection of essays, my favorite of which seem to include a lot of Brian Phillips' personal reflection as well as intense and interesting travelogues. The essays I enjoyed most evoked a strong feeling of I want to go to there. Like, maybe it's time to finally visit Alaska and do some backpacking around ~~McKinley~~ Denali? And yes, I'm definitely overdue for another Japan trip, and maybe I should try watching Star Trek TNG again, and how is it that I haven't seen the Soviet Tale of Tales cartoon? (Update: I did, and it was good.)

Part of what is appealing is how immersive the essays are, and the comprehensive picture that is painted in so short a passage. It feels like I’ve been there and back! This is helped by the fact that Phillips is a talented author, eg:

But the bureaucrats seized it from the priests years ago and, exercising their own power of transubstantiation, made it into something else. Now it is a puppet workshop that only happens to look like a church: in the same way that Eucharist blood once happened to taste like wine.

England pulls the sea around her like a mantle: these waters our robe of ermine, these stars our imperial crown.

Another observation: Phillips is clearly from the internet, which shines through in the way he writes. But this does not detract from his writing, instead it somehow legitimates writers from very online culture I know so well.

I did find that there was some unevenness to the quality of the essays. Some of them didn't leave an impression at all, and some I thought were just weaker than others. I found the UFO essay to be a bit too unfocused, a mishmash of cultural tropes and Americana. My theory is that Phillips' own experience really add to the essays, and this was not always present. In other cases, the topics were too far from my interest.

A pointers to follow: Robert Service poems about Alaska & co... pretty good, eg. The Spell of the Yukon

No! There’s the land. (Have you seen it?)    It’s the cussedest land that I know, From the big, dizzy mountains that screen it    To the deep, deathlike valleys below.