How to Take Smart Notes 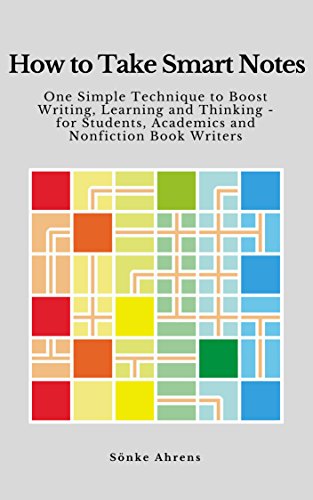 Zettelkasten Method, In Praise of Niklas Luhmann, or Ode To The Slip-box.

The Roam cult sprang out of a practice called Zettelkasten. I refuse to join the cult, but see great value in cross-linked note taking practice. So far my tool of choice is Obsidian, mainly because I like plaintext. This book introduces the Zettel method.

It is not possible to think systematically without writing - Niklas Luhmann

Tools for your own thoughts: Richard Feynman once had a visitor in his office, a historian who wanted to interview him. When he spotted Feynman’s notebooks, he said how delighted he was to see such “wonderful records of Feynman’s thinking.” “No, no!” Feynman protested. “They aren’t a record of my thinking process. They are my thinking process. I actually did the work on the paper.”

A mirror of your brain: These notes are not meant for external consumption. They are meant to be a reflection and formalization of your thoughts. As you think about a topic, your mental model of the topic evolves, as does this collection of interlinked notes. Even if your memory fades, you can return to your notes and continue where you left off.

Integrate seemingly unrelated sources: This is especially powerful as a way to integrate learnings from multiple sources into one place. "When we turn to the slip-box, its inner connectedness will not just provide us with isolated facts, but with lines of developed thoughts." Read with an eye towards possible connections in the slip-box.

Same format, same place: Fleeting notes are only useful if you review them within a day or so and turn them into proper notes you can use later. No underlined sentence will ever present itself when you need it in the development of an argument. Write brief accounts on the main ideas of a text instead of collecting quotes.

Keep notes short: By restricting ourselves to one format, we also restrict ourselves to just one idea per note and force ourselves to be as precise and brief as possible. A good rule of thumb for working with the program is: Each note should fit onto the screen and there should be no need of scrolling. This will also allow for more ready interconnections.

Avoid premature linearization: ‘Have the courage to use your own understanding,’ is therefore the motto of the Enlightenment.” Prearranging information, sorting it into modules, categories and themes achieves the opposite of what teachers intend to do. The linear process promoted by most study guides, which insanely starts with the decision on the hypothesis or the topic to write about, is a sure-fire way to let confirmation bias run rampant.

Feedback loops emerge: The addition of one note leads to a correction, a complementation or an improvement of old ideas. The great new idea you are about to add to the slip-box turns out to be already in there. Even worse, chances are this idea wasn’t even yours, but someone else’s. It is such an important skill to see differences between seemingly similar concepts, or connections between seemingly different ideas.

Take it slow: it takes time to evolve any idea, and this is another benefit of the slip-box. Related to Slow hunch. Taking smart notes, we collect en passant the material for our future writings in one place.

Don't force a direction: Luhmann’s answer to the question of how one person could be so productive was that he never forced himself to do anything and only did what came easily to him. It is like martial arts: If you encounter resistance or an opposing force, you should not push against it, but redirect it towards another productive goal. The slip-box will always provide you with multiple possibilities.

Publishing by finding a path in the graph: once you have this densely linked note cloud, and you want to cobble together an idea for others to consume, you weave a path through your graph and create a linear narrative. "We extract information from different linear sources and mix it all up and shake it until new patterns emerge. Then, we form these patterns into new linear texts."

“On one hand, those with wandering, defocused, childlike minds seem to be the most creative; on the other, it seems to be analysis and application that’s important. The answer to this conundrum is that creative people need both … The key to creativity is being able to switch between a wide-open, playful mind and a narrow analytical frame.” - Jeremy Dean