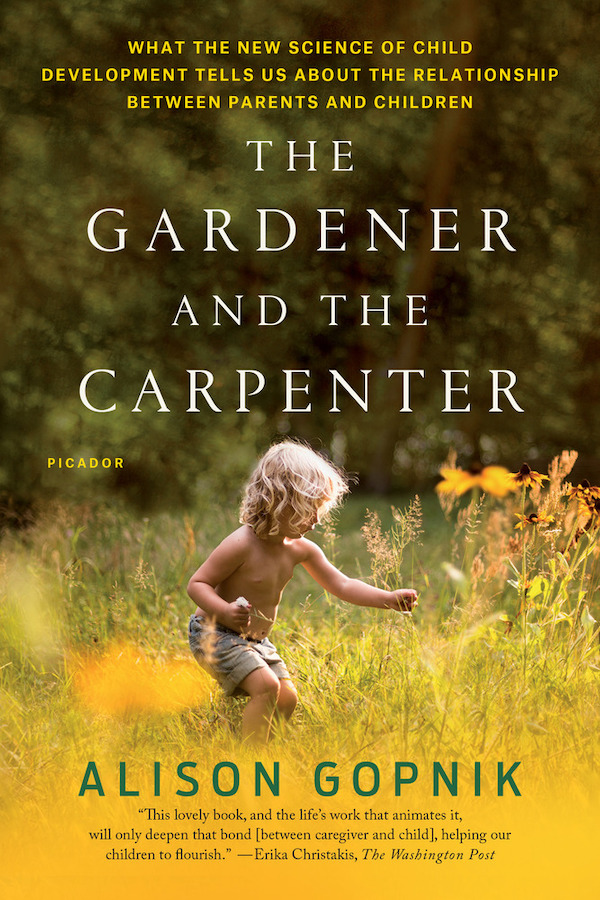 This one's been on my radar for years. I've read a lot of the author's articles and generally feel a strong affinity for Isaiah Berlin, whom Gopnik has done quite a bit to popularize. Self described as a Bubbie from Berkeley with a PhD in developmental neuroscience that sometimes dabbles in philosophy.

The message promulgated in most parenting books is that raising kids is like carpentry: consider what material your dealing with, form a well specified blueprint, measure twice, cut once. Then you can judge how well you’ve done by the final result.

A parent’s goal should instead be to raise their child like resilient garden that can adapt to a dynamic world. Such a garden or maybe even wild meadow evolves and adapts to circumstances. This is in contrast to a much more static approach of growing hot house tomatoes. The hot house is highly regulated and creates ideal circumstances for the tomato to grow. But these ideal circumstances are not reflective of the real world. Hot house tomato’s are not resilient.

Reminds me a bit of legibility and Seeing Like a State by James Scott but applied to children. Authoritarian High modern failure mode in kids is one that tries to carpenter too much. I have examples of this in distant friends: MA rebelled against becoming a doctor, IN rebelled against becoming a software engineer. Both results were disappointing to their parents. Better to not be so prescriptive.

(Does this idea of parent-gardener break down if you consider a very large garden? I guess if garden is large enough you end up with parent-industrial farmer. Is that what school is then?)

I appreciated the more philosophical bent, especially as compared to other parenting books. But the narrative sometimes bent towards a pedantic but still an insightful critique of “parenting” especially as a goal driven activity. You don’t go around “friending” people, offspring are never “childing” you and your spouse is not usually “wifing” you. Gerunds have their place though.

Other relationships offer an interesting parallel: you don’t think you are a successful friend if they have become successful. Nor do you become a successful husband by profoundly improving your wife.

Many observations framed as paradoxes. Sounds more like tensions to me. Tensions between:

Fundamentally, Open-endedness is required to solve ambitious problems. Play and childhood are optimized for this.

Historically, humans live grown in large, multigenerational families. Most have the opportunity to help raise siblings Or cousins before becoming parents. Once parents, their kids are raised in large party but extended family.

Families growing smaller. More mobility. Having kids later in line after more education. Many new parents don’t have any expertise with kids at all.

“Parenting” builds on this gap in knowledge and caregivers. It’s profits from the expectation of educated people that things are learned through books.

Referencing Omnivore's Dilemma by Michael Pollan. What was formerly a traditional way of being, like cooking meals from a certain cuisine, was replaced by a sort of science-inspired explosion of dieting advice. The more we deliberately cook and eat to become healthy, the less healthy we become.

The sheer quantity of parenting and dieting books itself is just an indication that none of them work. If one did, they’d all be out of business. This critique reminds me of the one in Two Watersheds - too much institutionalization.

If a child is slightly better at using a tool, this advantage is slightly conferred to their offspring. And the effect compounds. Children's brains are the largest of all animals and our childhoods are the longest. Largely this is to have more time to develop and grow a brain, which is extremely plastic so that it can adapt maximally to its cultural milieu.

Birds are categorized as either precocial or altricial, depending on their capabilities at birth.

“Our minds can change rapidly… in just a few generations!”

Evolution: why do women live past menopause?

Most mammals die before they reach menopause.

Gopnik, a grandma herself, produces a strong argument in defense of grandmas. Post-menopausal grandmothers are evolutionarily advantageous because they allow their children to have more offspring despite the high maintenance and long childhood of each grandchild. By providing more childcare, the grandmother helps scale her genetic impact.

It's a reinforcing feedback loop.

I'm intrigued by this idea of Catholic Age of Reason is 7. Clearly the long childhood has become much longer in recent generations.

Gopnik presents a convincing critique of evolutionary psychology. So much of being a human is embedded in our culture that it’s unclear that insights from the Pleistocene are applicable without lots of caveats. She also draws on the vast variety of behaviors exhibited by other primates. Gorillas are very aggressive and organize in harems, bonobos are very promiscuous and enjoy free love.

But then almost in the same breath, she proceeds to refer to a lot of evolutionary psychological studies, such as an interesting explanation of why post-menopausal women make sense from an evolutionary perspective.

In favor of apprenticeships

More evo-psych studies in which Gopnik makes an ultimate argument against schooling and in favor of the traditional master-apprentice model. There's a bunch of social psychology studies and half of them sound a little bit dubious. It's also often unclear how they relate to the thesis the book.

Young children naturally imitate adults, under certain conditions: that the adult seems to be confident, that they have a good track record of success, that the adult is not a robot, etc.

Kids also over-imitate, which is to say they will repeat additional actions of the adult even if they appear to be superfluous. Does this natural inclination of over-imitation explain rites that carry over almost verbatim l'dor v'dor? TRADITION!!

Grad students are often professor apprentices, learning to write and getting critiqued.

“For most of our history, children have started their internships at age 7, not 27”

Gopnik describes a thought experiment in which baseball is taught as if it were part of the core school curriculum. Students would begin with history of the game, introduction to running, then dive deeply into ball and bat construction, and those that get accepted into a Masters in Baseball might get to play some softball in the last few months of their degree.

Great (apocryphal) story about the master swordsman who forced his pupil to cook his food. But would show up randomly in the kitchen and smack his apprentice with a wooden sword. After three years of this the apprentice became always vigilant. Full legend is The Taste of Banzo's Sword

Effective passage on "the device", which is reads like a Tristan Harris-style attack on smartphones, social media, or insertbogeymanhere. She then reveals that it's actually about books, which were similar criticized by Socrates. This is a good reminder about generational conservatism, and made me feel more inclined to pursue far future technology with questionable social implications.

Interesting that children seem to seek out evidence that contradicts their theories as part of play.

"I am tired," said Miss Havisham. "I want diversion, and I have done with men and women. Play." I think it will be conceded by my most disputatious reader, that she could hardly have directed an unfortunate boy to do anything in the wide world more difficult to be done under the circumstances.

Play must be spontaneous and is demonstrably more effective than teaching in some cases. Gopnik cites a study where children were either 1) shown how a multifunctional toy works, or 2) allowed to discover the functionality for themselves. Children shown how to play with a toy did not tend to discover other novel ways of playing with it while those that were allowed to explore ended up discovering more functionality. (Surely this depends on how much functionality was demonstrated in 1).

Why is play fun?

Why is sex fun? Evolution made sex fun so that people and animals would do it and propagate our genes.

Why is play fun? Evolution made play fun so that people and animals would learn how to world works experientially. (All of this flies in the face of the earlier critique of evopsych?)

A grab bag of ideas

The books flows reasonably well, but some pieces feel more like a side show than a coherent part of the gardener vs carpenter thesis.

Most gardens have hundreds of plants growing in them. But your average kinder garden only has 2.5 kinders, and every parent wants to do everything in their power to help them thrive. Even in a garden with hundreds of plants, it's hard to really understand what works and what doesn't. With an N of O(1), you certainly don't want to experiment and risk failure. So people take the safe path, another example of Cover Your Ass.

This is my fundamental criticism of the Gardener model of parenting. In other words, I am identifying the core challenge to the parent. If Gopnik is indeed right, and the gardener model is the one to adopt, it is difficult for ambitious parents to do this in practice, because they are so invested in their child's future and be subject to competitive parenting, etc.