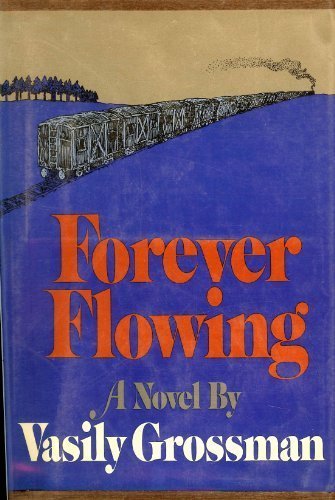 This unfinished work begins as a novel, and ends as a scathing critique of the Soviet Union under Stalin.

Viewing the work from the perspective of a novel is slightly disappointing. Although the characters are compelling, the narrative arc is stunted, leaving a lot to be desired. Briefly, the emaciated Ivan returns from a 30 year stint at a gulag, only to meet his pudgy, talentless cousin Nikolai, who has made a great career for himself by being unprincipled. Ivan's wife found a new lover, and most of his friends have died in the camps. Ivan begins anew, finds a job and falls in love with a woman who eventually succumbs to cancer.

The narrative in this book is shadowed by Grossman's critical agenda. This work is listed as an inspiration for Bloodlands by Timothy Snyder, but adds extra color to the history described there. The strength of Grossman's work incorporates some interesting historical ideas:

I elaborate on each idea in what follows.

Banality of Evil in Soviet Russia

Ivan's cousin Nikolai Andreyevich is very good at blending in to the (terrible) times. An adaptive chameleon without serious principles, but a self-described decent man, and truly well meaning. Sure, sometimes he agrees to sign an order to punish an enemy of the people, or condemn a Jew for his treasonous poisoning of a respected party member. But these people are certainly guilty, and deserve to be punished. All in a day's work for a well respected member of society. At any rate, it's a comfortable life.

Yet even for Nikolai, uncertainty lingers in the background. He knows really decent Jewish doctors personally. What if some of accused are innocent? Could it be that Stalin and the party are wrong? No — unthinkable. When, upon his death, Stalin turned out to be not such an infallible leader, things got uncomfortable really quickly.

The pudgy wine-drinking Nikolai, with his jowls and heavyset build, contrasts starkly to his principled, emaciated cousin. Sometimes Nikolai wished he could take Ivan's place in principled opposition, even if it meant thirty years in a gulag.

Grossman does an impressive job of explaining and understanding various kinds of traitors against humanity. He is able to apologize on their behalf and explain their behavior from their own perspective. Judas I, II, III and IV are all good men at their core. Some are erudite scholars, some have great respect for their parents, and love their children. All of these various flavors of everyman busy informing on one another. It's just what you do.

Yet even towards this scum, Grossman calls for moderation lest we become Stalinists ourselves.

Butchers and hairdressers: Moscow in the 50s

The greatest and most disgusting defence of this behavior was to deflect blame from the government, and attribute it to human nature itself. The baby grows into an informant organically through mothers milk. Humanity is naturally corrupt and people are either deserve to be informed on, or inform on others for personal gain. This deeply insidious position is still espoused by Russians today: a nihilism and fundamental pessimism about human nature. Russia's strategy is sowing cynicism.

This deflection was effective. Many gulag denizens believed in their own innocence (a clerical error) while insisting that the system was working as intended. Surely de-kulakification doesn’t just happen to hard working peasants. Those slackers deserved it!

In fact, the government was directly to blame. Not informing was potentially punishable by jail time. You could get ten years for NOT reporting on your friends. Women were often the main victims here, as wives would get ten year sentences for not reporting on their husbands. The more prominent the man taken to the gulag, the more women in his sphere would get taken away to women's camps: his mother, his wife, his sisters, his daughters.

Woman’s camps totally terrifying. Women would get ten year sentences for not reporting on their husbands. Prominent husbands would cause more women around them to get sent away to camps.

Stalin's system pre-emptively punished potential criminals. Those that were jailed and sent away weren’t usually guilty of any real opposition, merely belonged to some group that might tend, in the right circumstances, to have a higher probability to oppose the government. A terrifyingly high modernist stance, straight from Minority Report.

After Nikita Khrushchev dismantled Stalin's cult of personality, there were no consequences for those informants that did it for personal gain. All of the blame was attributed instead on Stalin personally, not on the system underlying the brutal famines and repressions.

During the famines of 1932-33, NKVD checkpoints on roads prevented Kulaks starving in the villages from leaving. Many desperate enough to try to flee through the swamps met their deaths in the wilderness.

A PR campaign raged to try to conceal the famine from the population at large, but many city dwellers knew anyway and passengers on the Kiev-Odessa express would throw food out of their windows when traveling through famished Bloodlands so that villagers could scavenge for scraps near the train tracks after the train passed. Again, the authorities intervened and installed guards to lock car windows when passing through starving regions.

As the famine eased and villagers were able to claw their way back into the cities, Grossman vividly describes bread lines were unlike any other. A line of people, each hugging the person in front to ensure their place oscillated like a wave. Every hungry stumble created a ripple through the line, but it stood firm. I found this image of emaciated people, clinging on for dear life and howling from hunger visceral and terrifying.

The strong state, an end in itself

Those faithful to the original bolshevik vision of international communism became unnecessary ideologues for Stalin. When the tides shifted and the idea of the Comintern fell out of favor, the old internationalist dogs needed to be put down. How to best do this? Declare them enemies. Hence the Stalinist repressions of 1937-39. Stalin was tired of this entourage of useless old dogs following him around, so he simply murdered them, at scale.

The soviet state was purportedly created for the benefit of the people: the workers, the farmers. A strong state was established as a means to achieve this end, but sometime in the early decades of the Soviet Union, the original goal was forgotten. Over time, the means became the end. For Stalin, crushing a few million people became the new means to the real end: a strong state.

Who, asks Grossman rhetorically, should be Lenin's successor? Would it be the brilliant, turbulent, magnificent Trostky? The charming, gifted political theorist Bukharin? Perhaps the one closest to the workers Rykov? Maybe the well educated, confident, and sophisticated governor Kamenev? Last but not least, the one best versed in international labor, Zinovyev?

All of these men embodied aspects of Lenin's multifaceted personality, but none of them captured the essence of his soul: thirst for power. Stalin executed all of them, eliminating these subsidiary aspects of early Soviet rule which were merely getting in the way. The real goal was to raise and strengthen Lenin's banner over Russia, consolidate power, and build a powerful state.

To Grossman, Lenin’s intolerance, his firmness, his fanaticism all stem from the centuries of Russian unfreedom and intolerance. Grossman sees Stalin not as a huge departure from Lenin's tenure, but as a logical continuation of former events, and a cementing (as per Yesenin) of the existing path.

Freedom had almost no grounding in Russian history at all. Any notions of liberalism are entirely imported from western thought. The government was only democratic for two brief moments: the period of 1905-1917, then again roughly 1991-2000. Other than that, the default state of Russia for the last millennium has been unfreedom.

Grossman writes almost from a Eurasianist perspective, emphasizing Stalin's veneer of culture on top of a Mongol yoke core. Stalin's Russia was certainly the successor of the Tatar-Mongol empire. See The Legacy of Genghis Khan - The Mongol Impact on Russian History, Politics, Economy, and Culture notes.

There are a surprisingly large number of words for serf in Russian: крепостной, холоп, ишак.

For Grossman, the real revolution in Russian history was the prohibition of serfdom in the 1861. The Revolution of 1917 and the rise of Lenin and Stalin is a reversion to Russia default state of unfreedom.

Glimpses of Russian influence were imagined during the height of Russia's monarchic peak a century before the revolution of 1917, but never like this.

Rather than shining as a beacon for those dreaming of a communist utopia, Lenin's Soviet Russia rose up as an example of a simpler totalitarian society for the west to emulate. First Italy, then Nazi Germany followed suite. Leninism inspired authoritarian regimes in Asia too, including Communist China. Its legacy continues, with menacing echoes into the present day.