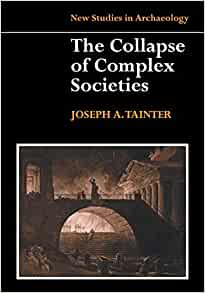 I read Collapse of Complex Societies on GB' suggestion. This one was a doozie, and I must say, often over my head for its breadth of references into specific civilizations that I have no background with at all. And Tainter assumes you are either familiar with a broad variety of civilizations in detail, or will do the legwork to get there. As a result, I felt that this book was better suited to an Anthropology/Archaeology professional.

Tainter strives toward a general pattern of collapse, one that applies to all collapses at all times. Very simplified, it goes like this. A civilization grows, becomes more complex, and then crumbles under its own success. Succinctly:

Think of civilisation as a poorly-built ladder. As you climb, each step that you used falls away. A fall from a height of just a few rungs is fine. Yet the higher you climb, the larger the fall. Eventually, once you reach a sufficient height, any drop from the ladder is fatal.

In Tainter's words, four concepts lead to understanding collapse, the first three of which are the underpinnings of the fourth. These are:

Thus, while initial investment by a society in growing complexity may be a rational solution to perceived needs, that happy state of affairs cannot last. As the least costly extractive, economic, information-processing, and organizational solutions are progressively exhausted, any further need for increased complexity must be met by more costly responses.

Once a complex society enters the stage of declining marginal returns, collapse becomes a mathematical likelihood, requiring only time.

The following diagram is illuminating:

I am immediately reminded of Two Watersheds - too much institutionalization, but Tainter's argument is even more macro. The whole of society reaches the second watershed, and then sets itself on track for general collapse.

The features that popularly define a civilized society - such as great traditions of art and writing - are epiphenomena or covariables of social, political, and economic complexity. Complexity calls these traditions into being, for such art and literature serve social and economic purposes and classes that exist only in complex settings. Civilization emerges with complexity, exists because of it, and disappears when complexity does.

Thus, Tainter argues, rising and falling complexity is a monitor for the phenomenon termed civilization.

States are complex, chiefdoms are simple

Tainter distinguishes between complex and simple societies. Most societies are complex, and governed by states. Robert Carneiro has estimated that 99.8 percent of human history has been dominated by states.

In contrast, simple societies, governed by chiefdoms are limited by the obligations of kinship and the lack of true coercive force. By the time human organizations emerged that today would be called a state, these limitations had been surpassed.

The features that set states apart ... are: territorial organization, differentiation by class and occupation rather than by kinship, monopoly of force, authority to mobilize resources and personnel, and legal jurisdiction.

Tainter sees states as a series of complex systems. Very much along the lines of Thinking in Systems by Donella Meadows.

Complex societies tend to be what Simon has called "nearly decomposable systems". That is, they are at least partly built up of social units that are themselves potentially stable and independent, and indeed at one time may have been so.

How are states formed? Conflict vs. integration theory

Tainter fairly accuses the reader of being obsessed by collapse, and insufficiently interested in formation.

It cannot be wholly resisted, for collapse may not be understood except in the context of how complex societies function and operate, and that cannot he divorced from the question of how they have come into being.

Conflict theory can be traced to Ibn Khaldun (1377). In essence, conflict theory asserts that the state emerged out of the needs and desires of individuals and subgroups of a society. The state, in this view, is based on divided interests, on domination and exploitation, on coercion, and is primarily a stage for power struggles (Lenski 1966: 16-17). More specifically, the governing institutions of the state were developed as coercive mechanisms to resolve intra- societal conflicts arising out of economic stratification (Fried 1967; Haas 1982: 20). The state serves, thus, to maintain the privileged position of a ruling class that is largely based on the exploitation and economic degradation of the masses.

Conflict theory suffers from a problem of psychological reductionism. That is, the emergence of the state is explained by reference to the wishes, intentions, needs, and/or desires of a small, privileged segment of society.

Integration theory suggests that complexity, stratification, and the state arose, not out of the ambitions of individuals or subgroups, but out of the needs of society. The major elements of this approach are: (a) shared, rather than divided, social interests; (b) common advantages instead of dominance and exploitation; (c) consensus, not coercion; and (d) societies as integrated systems rather than as stages for power struggles (Lenski 1966: 15-17). The governing institutions of the state developed to centralize, coordinate, and direct the disparate parts of complex societies.

Integration theory resonates with me. Specifically this framing as stratification as a necessary evil:

The costs of stratification are a necessary evil which must be borne to realize its integrative benefits. In basing the development of complexity on real, observable, physical needs (defense, public works, resource sharing, etc).

It also does not preclude that compensation of elites does not always match their contribution to society.

There is, however, a very important point that conflict and integration theory have in common. In both views, states are problem-solving organizations. Both theories see the state as arising out of changed circumstances,

Partial imperial collapse is common Tainter identifies a pattern in which an empire doesn't fully collapse, merely loses its colonies and reverts to being a standalone country:

Other cases that could be added to this list are the collapses of modern empires (such as the Spanish, French, and British). The demise of these empires clearly represents a retrenchment from a multi-national level of centralized organization that was global in extent. There are, however, differences from the majority of cases just discussed. Most notable is the fact that the loss of empire did not correspondingly entail collapse of the home administration.

the Allied troops... found a city that was dead. The Turkish government had just ceased to function. The electrical supply had failed and was intermittent. Tramways did not work and abandoned trams littered the roads. There was no railway service, no street cleaning and a police force which had largely become bandit, living on blackmail from citizens in lieu of pay. Corpses lay at street corners and in side lanes, dead horses were everywhere, with no organization to remove them.

Institutional collapse Each civilization may typically contain a number of individual political entities that themselves rise and fall. However the definition of "civilization" tends to be vague and intuitive.

Cultural continuity Even if a civilization collapses, the culture tends to continuity.

A catalog of other causes of collapse

Tainter is skeptical about many commonly provided reasons for collapse:

None of these factors help understand collapse as a general phenomenon, applicable to all societies.

Tainter has general critiques of his predecessors:

Rarely do authors question the logic of the climate proposition: How does or how can climatic fluctuations, invaders, and so forth lead to collapse? Can the postulated cause really account for the outcome? Is the explanation adequate?

Resource depletion: If a society cannot deal with resource depletion (which all societies are to some degree designed to do) then the truly interesting questions revolve around the society, not the resource. What structural, political, ideological, or economic factors in a society prevented an appropriate response?

Elite misbehavior: To suggest that societies collapse because elites act unwisely explains little. Are there conditions under which elites act wisely or unwisely, or is this a random variable? Is it even a definable and measurable factor?

Self-sufficiency and autonomy of local systems are reduced as specialization increases. As special-purpose subsystems become increasingly differentiated, stability declines. Disruptions occurring anywhere will be spread everywhere, whereas in less complex settings a society would be cushioned against disruptions by less specialization, less interlinkage among parts, and greater time delays between cause and ultimate outcome.

The more specialized and adapted a form in a given evolutionary stage, the smaller its potential for passing to the next stage.

This rhymes quite a bit with The Great Filter solution to Fermi's paradox. Service also writes:

Successful complex societies become locked into their adaptations, and are easily bypassed by those less specialized. So by having greater flexibility, less complex border states gain an increasing competitive advantage, and are thus able ultimately to topple older, established states

Another way of stating the same thing is the Dinosaur Model. Here, a complex society is seen as a lumbering colossus, fixed in its morphology, and incapable of rapid change. Locked into an evolutionary dead end, it represents an investment in structure, size, and complexity that is awesome and admirable, yet highly maladaptive. When stresses arise, such a society cannot adapt, and so must expire.

This rhymes very much with Disruption theory in business. This lock-in phenomenon can also be framed as a feedback loop:

Other scholars implicate a positive feedback loop in collapse, from which escape is impossible. Colin Renfrew (1979) argues that under stress complex societies lack the option to diversify, to become less specialized. By doing more of what may have caused the problem in the first place, the breakdown of the system is made inevitable.

The Runaway Train model may be a variant of the Dinosaur model, but it has its own distinct characteristics. A complex society is seen as impelled along a path of increasing complexity, unable to switch directions, regress, or remain static. When obstacles impinge, it can continue in only the direction it is headed, so that catastrophe ultimately results.

The House of Cards model differs from the previous two. It suggests that complex societies, either as a rule or in certain kinds of environments, are inherently fragile, operating on low margins of reserve, so that their collapse is inevitable.

The argument of these laws and models is that all societies, complex or otherwise, run the risk of adapting so well to existing circumstances that change becomes impossible.

For Tainter, complexity reduction causes depopulation and not vice-versa. Depopulation is often correlated with decline

A complex society that has collapsed is suddenly smaller, simpler, less stratified, and less socially differentiated. Specialization decreases and there is less centralized control. The flow of information drops, people trade and interact less, and there is overall lower coordination among individuals and groups. Economic activity drops to a commensurate level, while the arts and literature experience such a quantitative decline that a dark age often ensues. Population levels tend to drop, and for those who are left the known world shrinks.

Complexity and stratification are oddities when viewed from the full perspective of our history, and where present, must be constantly reinforced. Leaders, parties, and governments need constantly to establish and maintain legitimacy. This effort must have a genuine material basis, which means that some level of responsiveness to a support population is necessary.

Civilization itself (i.e., great complexity), to Rappaport, may be maladaptive: Civilisation has emerged only recently - in the past six thousand or so years - and it may yet prove to be an unsuccessful experiment' (Rappaport 1977: 65).

The Ik People are really fascinating:

Children are minimally cared for by their mothers until age three, and then are put out to fend for themselves. This separation is absolute. By age three they are expected to find their own food and shelter, and those that survive do provide for themselves. Children band into age-sets for protection, since adults will