My latest AI gardener apprentice finds pairs of notes that aren't explicitly linked, but maybe ought to be. This project was inspired by the human subconscious, which creates, cements, and removes neural connections during sleep.

Like a sleeping brain, my python script runs nightly, scouring my note garden for related notes. The end result is a list of the most similar notes pairs in the garden, based on semantic similarity. I found the results to be illuminating, and a real-time version with solid UX would be a central feature of my system for thought.

Ideas are naturally interlinked. They build on one another, like stepping stones in the Adjacent Possible. Concepts build on one another forming a dependency tree, and you can only learn something if you have first prepared a place to attach the new information. In other words, it must be in your Zone of Proximate Development. Fortune favours the prepared mind.

Our brains reflect this interlinked nature of ideas, with billions of neurons and trillions of connections between them. This complicated machinery does its best to create a representation of the world around us.

When we sleep, automatic processes in the brain tend to these connections, creating new links, removing the obsolete ones, and paving the cowpaths. Sleep has a profound effect on memory and learning.

An ideal collection of personal notes mirrors your own thoughts. Obsidian emphasizes interlinking, and places a lot of weight on the note graph, a mind map-like view of the whole note garden resembling a connectome. Connections are emphasized in Roam's marketing copy as a "note taking tool for networked thought".

While today's crop of note taking tools makes links and backlinks easier to manage than before, it's still a pain to interlink notes. One major challenge is to recall what related notes you might have written in the past.

What is the note garden equivalent of sleep, during which the brain's subconscious processes triage new information gleaned during the day? What might be useful automation for us note gardeners?

I take a fair amount of notes and sometimes have a feeling of deja-vu when I realize that I've been parroting something I already wrote many moons ago. If like me, you have a large note garden, a stable set of interests, and a crappy memory, you might know what I'm talking about.

The simplest remedy to this problem might be to scour the note garden, looking for redundancies: ideas that appear in multiple places. You might prune the redundant note, reword it, link it to something relevant, or refactor multiple notes to make more sense together.

Of course, redundancies aren't all bad! Notes need enough context to stand on their own and topics that are interconnected can't help but overlap somewhat. The goal here is not terseness, but cohesion and legibility. If a note is related to other notes, let's cement that relationship with an explicit link.

Now, how might we determine if two notes are related? One could simply consider two notes to be related if they have significant overlap in words. But we are better than that. The NLP keyword for this problem is semantic similarity.

For words, the situation is relatively simple. word2vec takes a word and represents it as an array of numbers. Words that are semantically similar end up closer together in the resulting vector space, and those that are semantically different end up far away. The same can be done with sentences, using some of the same machinery that powers large language models. We have the technology to take a whole sentence of variable length and create an embedding for it. Once we have the ability to generate embeddings from sentences, we can compare two sentences by evaluating how close or far their embeddings are.

We can do the same thing at a larger scale. Given N sentences, we calculate an NxN matrix of similarity values which might look like this: 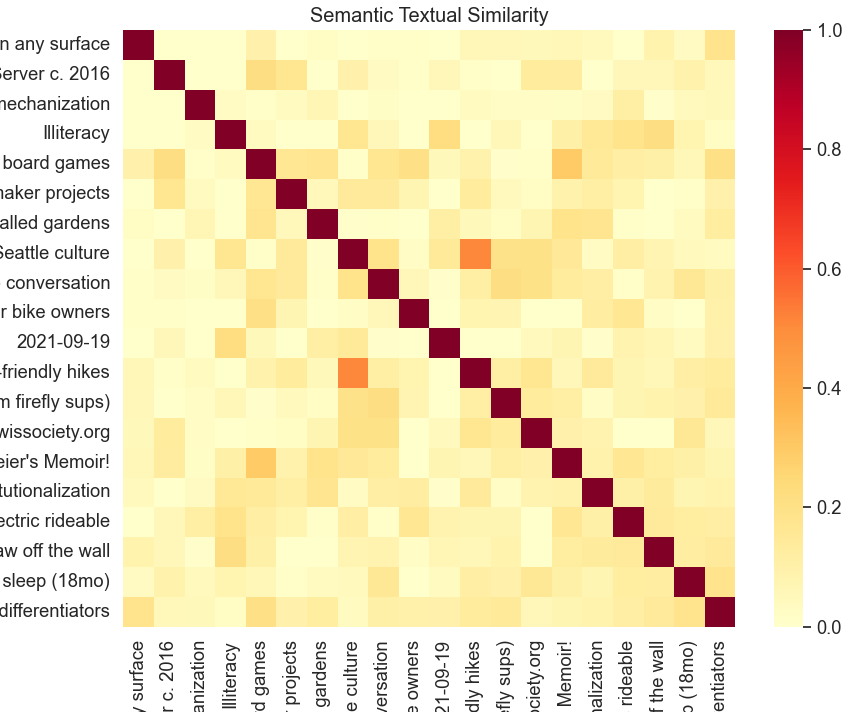 Semantic similarity in my note garden

I wrote a python script to find related notes in my note garden. Here's how it works:

Now we have a list of the most similar notes in the garden, their associated similarity scores.

Notes that are already interlinked should not show up in this list of similar notes. Their similarity is already legible to the system, and there are really a lot of such notes. For instance, most of my Medieval history notes are highly semantically similar, because they are derived from similar books and cover very similar themes.

We can easily filter out these note pairs by considering the graph structure of the note garden. An adjacency matrix gives O(1) lookup. In practice, going on step further and ignoring note pairs that are a minimum distance of 2 away has worked better on my note corpus. To help with this, I hired the Floyd–Warshall algorithm and its friendly scipy implementation. Once you have the matrix of minimum distances, filtering out the note pairs is easy.

Living with the note garden linker

I run the semantic similarity AI nightly. This generates an updated note called Similar notes.md which lists the most similar notes in my note garden. The resulting note is a collection of entries that look like this:

There is some mathematical beauty to a script which takes a collection of notes as input, and outputs another note. Having notes update overnight without my intervention makes the note garden feel like it's alive and growing. That said, having an AI make arbitrary modifications to my hand written notes sounds like a real nightmare. To mitigate this, I have by convention decided to keep all AI-produced notes in the Nightly/ directory.

My note linker has been up and running for the last month, so I have a sense for how useful the resulting output is. One observation is that my note garden grows slowly, and most notes are relatively static. The first time I ran the similarity script, I found a lot of surprising and actionable output, but unless I have an especially prolific note taking session, running over the whole corpus nightly is probably overkill. More on this later.

Going through a fruitful generated list of similar notes, I tend to take one of the following actions:

Any of these actions will cause the entry to disappear from Similar notes on a subsequent run. A virtuous cycle.

Repetition in my book reviews

I found some surprising redundancies in my book reviews. In 2017, I overused the word "vivid" (similarity 0.71):

Gatsby: Incredibly vividly written. Fascinating to see the self made struggles of people that are so fantastically well off. Very unsympathetic characters throughout, except for the narrator.

Nothing is True and Everything is Possible: Super well written, incredibly engaging throughout. Incredibly so for non-fiction about a depressing topic. Much more entertaining than Gessen’s barrage of pessimism.

Bird by Bird: I've forgotten how this book appeared on my radar, but I think it was on someone's list of most influential books ever. I am more ambivalent.

The Fourth Turning: I don’t remember why I decided to read this book. The political theory it describes is loved by both Gore and Bannon. This surprisingly heterogeneous recommendation reignited my interest when I saw it on my reading list.

Building a Bridge to the 18th century: I found the book mostly useless. It's a shallow summary of some stuff I already knew, and set forth an exaggerated technological pessimism that I, to some extent, share.

You Belong To The Universe: The book itself is interesting but not groundbreaking. It involves overly flowery descriptions of things that I consider obvious: Google, Nest, Sim City, self driving cars, etc.

How to handle quotes?

I have a special note where I track quotes that I really enjoyed from all over the place. Since I like them, these quotes end up in other notes too. Since the quotes are inserted verbatim, their presence is a very strong signal for note similarity.

My current solution is to ignore my Quotes I like.md note for this analysis, but this is a hack, since there are still many instances of the same quote across different notes used perhaps in different contexts. A shared quote is very weak evidence that the two notes are related, often insufficient to warrant a direct link.

One approach I haven't yet tried might be to discard identical matches as meaningless. This would naturally discard quotes, since they are generally inserted verbatim.

The USE semantic similarity model I currently use is somewhat limited. It doesn't perform well on non-latin character sets. According to it, anything with cyrillic characters is extremely semantically similar. Relatedly, it doesn't perform well on non-words. Snippets of code, guitar tabs, and ASCII art all look same. Lastly, USE is already 4+ years old. AI/NLP is progressing so quickly, I should be using a more modern model to generate embeddings. I recently got access to OpenAI's beta embedding feature, which might be a logical next step. But running OpenAI embeddings on tens of thousands of paragraphs sounds like an expensive proposition. I'd like to continue to be able to run semantic similarity in the comfort of my own computer.

Let me be the first to admit that what I have hacked together is a crude prototype, and a very rough approximation of the ultimate user experience I want my note taking app to provide. I want to be able to request suggestions for relevant notes to reference as I write, in a way that is not distracting.

If I had time, I'd build an Obsidian plugin version of what I've built as a shell script:

Wanna build it together? I promise to cheer you on from the sidelines! Drop me a line.